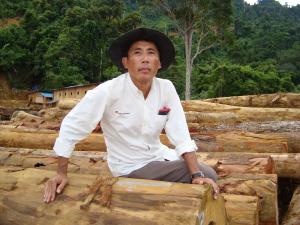 We can  now confirm that the people jailed for protesting against the Chief Minister’s sister’s company, Quality Concrete, logging in their Native Customary Lands have be released after sizeable protests outside the police station in Simunjan where they were being held. They had been accused of allegedly setting fire to the logging camp, but there is no evidence to back this claim.

In this running story see updates from news sites:

In a recent story Sarawak Report exposed the shocking attempt by the firm Quality Concrete to force Iban villagers to hand over their rights to 3,035 hectares of Native Customary Rights Lands in Sebangan for just MR 250 (US$ 80) per family.

The company, of which the Chief Minister’s sister Raziah is one of the Directors,  is after the millions of dollars-worth of rare and valuable hardwood trees in the area.  However the Ibans are refusing, saying they want to preserve their forest for future generations. 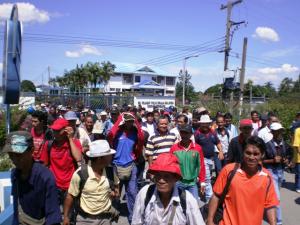 Protests outside the police station in Simunjan last week

Now, the leading protesters named in that story have been thrown in jail on the pretext of a fire that broke out at Quality Concrete’s logging camp on Monday.  There is no evidence about what happened, however ten local people were originally arrested and three have still not been released: these are Numpang Suntai, a retired worker for Shell; Nicholas Mujah, who runs Sadia, an NGO supporting Dayak rights and one of the local headmen, Tuai Rumah Sadon ak Ason.

There is no evidence against any of these men yet the political motives are clear.  Both Suntai and Mujah have been helping the locals with their vocal campaign and they have supported villagers who carried out a blockade against illegal logging by the company in their territory.  Yet neither were anywhere near the outbreak of the the fire and it is clear their arrests are purely a response to their legitimate protests on behalf of their community.  The pair came to Simunjan local police station in answer to a request by the local police chief, DSP Choo Yin Kok, whose telephone number  is 082 803779, Mobile : 019-8583016 and have not been released.

So who are the real criminals? 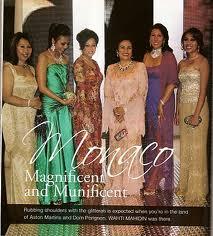 Staggering wealth - Razia and family, Tatler featured her dripping in wealth at a Monaco Party

There is no evidence that local people were behind the fire.  Indeed, since Quality Concrete’s provisional licence to log the area runs out next month, the motivation on their side is arguably stronger in terms of a potential insurance pay out.  Meanwhile, the logging camp itself remains illegal and Sarawak Report has documents showing that Quality Concrete has been banned by the Forest Department from carrying out further logging in the area until and unless the dispute is settled.

Therefore, Sarawak Report and several local and international NGOs are questioning on what grounds are these people being held?

Behind this scandal lies the malign influence of Raziah Mahumd, one of the Directors of Quality Concrete.  She is the sister of Chief Minister, Abdul Taib Mahmud, and she has like the rest of the family has built her vast fortune from exploiting her access to planning permits via her brother who controls them.  The only reason for having Raziah on the board of Quality Concrete, which is otherwise owned by the Sibu-based Tiang family, is that it is through her that they will have got the permit. 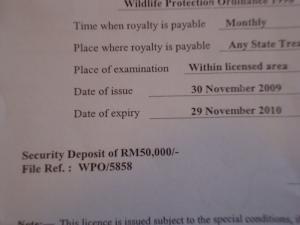 Quality Concrete's Licence is due to expire November 29th!

In return Raziah and her brother Taib will get their sizeable cut of the profits.  Timber industry insiders have testified to Sarawak Report in considerable detail how the system works and we estimate that the Chief Minister and his sister stand to make several hundred million ringgit out of the destruction of this area, which they are then planning to turn over to Oil Palm plantations.

Things have gone too far in Sarawak

The scandal of what is happening in Sebangan is a sign that the Mahmud family have lost all sense of reason and proportion in their continuing mismanagement and plunder of Sarawak.   In this case Raziah and her brother have been caught with their fingers in the till, stealing what is not theirs.  Their reaction has been to bring in the police to persecute those who are standing up to their corrupt practices.

Of course this is not the first time Sarawak’s ruling family has done any of these things, but their record is catching up with them and the glare of world publicity is on them.  We are just one week after the Sibu river disaster which Taib’s own Deputy and ‘Chief Cheer-Leader’, James Masing acknowledged was a man-made catastrophe caused by illegal logging allowed by Taib’s regime – a key sign that the old man is losing his grip. 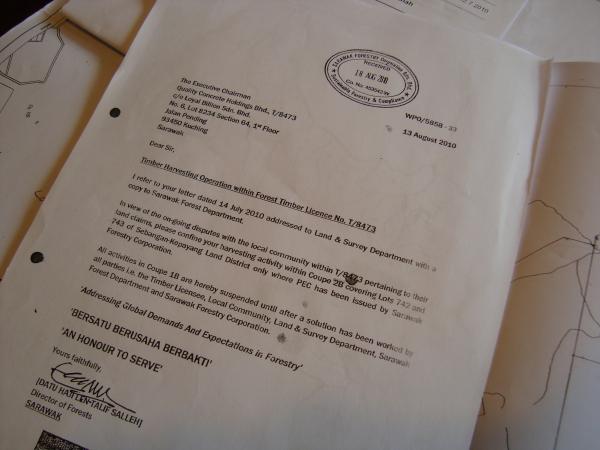 So who is acting illegally? This letter from the Director of Forests to Quality Concrete demanding they suspend activities in Sebangan until the dispute with locals is settled has been ignored by the company.

What is more, Sarawak Report’s original report on Raziah’s raid on Sebangan was networked across the globe to concerned groups and publications and received a huge response online.  The issue of the Ibans of Sebangan has also sparked a campaign in the United States and their plight has become a symbol of the corruption and injustice of Taib’s government.

Tonight, a distraught Christina Suntai, Numpang’s sister in Florida, called Sarawak Report to say he and his innocent friends are still in jail. “My brother has never done anything wrong, he is totally honest, all he has ever tried to do in his life is good”, she explained.  If only the same could be said for the current rulers of Sarawak!

Surely the Federal Government, which has charge of the police, must intervene in the name of good sense and prevent this abuse of power and symbolic example of rampant corruption in Sebangan?   To allow innocent protesters, who are of high-standing in their communities, to remain in jail in such a public case can only reflect even more badly and counter-productively against Taib and his faltering grasp of reality.