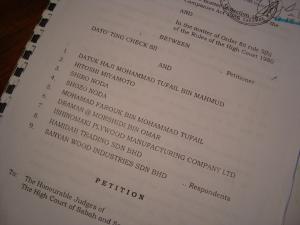 According to further allegations in the current court case between Dato’ Ting Check Sii and Tufail Mahmud in Sibu, Japanese investors in the Noda Corporation, a major public company which is quoted on the Tokyo Stock Exchange, have been cheated out of millions of ringgit by members of the Chief Minister’s family.

Dato Ting is the man behind the Sanyan Tower, Sarawak’s tallest building in Sibu and the multi-million dollar Sanyan Group of companies.  His allegations also implicate the Japanese Directors of a Sarawak subsidiary of the Noda Corporation, the Ishinomaki Plywood Manufacturing Company, whom he says knew about the fraud but failed to prevent it.

In his evidence, originally submitted in 2008, Dato Ting states:

“Your Petitioner [Ting] has just discovered that Datuk Tufail has made secret profits at the expense of the Company through Hamidah Trading, a company owned and controlled by Datuk Tufail”

The ‘Company’ referred to is Sanyan Wood Industries, which was a joint venture between Noda and the Sanyan Group. Ting goes on to accuse Tufail and the Japanese Directors of the joint venture of being “in breach of their fiduciary duties” by thus “unlawfully and unjustly enriching Datuk Tufail”. 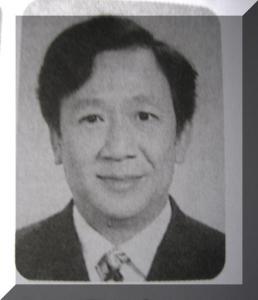 Dato' Ting Check Sii, the man behind the Sanyan Group

Dato’ Ting, who was a close business partner of Tufail Mahmud for 25 years and was a BN member of the State Assembly, used to be regarded as an ‘ultimate insider’ within the Taib family circle until he fell out with them in 2003.  For this reason his testimony is regarded as being particularly dangerous to the Taibs.

The information from this case could therefore have far reaching consequences for the ruling family, who are already facing a series of embarrassing disclosures about their extraordinary wealth and lack of social propriety. It is doutless for this reason that Tufail has both astonished and amused onlookers by bringing groups of black magic ‘bomohs’ into the court proceedings to chant and pray on his behalf.  This may not be enough when it comes to the impact of the case on public opinion.

But even more serious are the potential consequences in Japan. For while the elderly Chief Minister will strive to prevent any judgement against his brother, whatever the strength of the evidence, for as long has he remains in power, matters will be handled very differently in Tokyo. 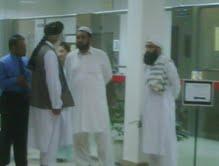 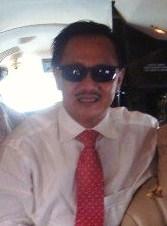 Tufail Mahmud, brother of the Chief Minister and Co-shareholder of the Sanyan Group

In Japan corporate corruption is treated with utmost severity and the authorities there are likely to scrutinise the available evidence very closely with a view to taking appropriate action against any entities within their jurisdiction.  Previously, in 2007,  the Taib family faced similar problems during the timber kick-back scandal, when a separate group of Japanese business associates fell foul of Tokyo’s tax authorities after it was discovered that millions were being paid by a shipping cartel to a company in Hong Kong associated with Onn Mahmud, another of the Chief Minister’s brothers.

The result was a severe fine for the Japanese shipping companies and one of Taib’s most damaging political embarrassments – an episode which haunts him to this day.  While Taib  can protect his family’s companies from prosecution in Sarawak, in Tokyo he is powerless.

Hamidah Trading – a company set up to perpetrate a fraud?

The substance of the accusation concerns the company Hamidah Trading.  Hamidah Trading was set up by Tufail Mahmud in April 2003 with his own daughter Anita Hamidah Tufail and the Chief Minister’s daughter Hanifah Taib as fellow shareholders at about the time Tufail succeeded in ousting Ting as Managing Director of  US$ 400 million Sanyan Group. 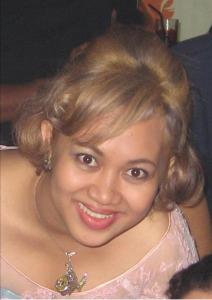 In order to also remove Ting from the subsidiary joint venture with Noda Corporation (which is 49% owned by the Noda Corporation and 51% controlled by Ting and Tufail as part of the Sanyan Group) Tufail allegedly put pressure on the three Japanese Directors on the Board, who were the representatives of the Noda Corporation subsidiary Ishinomaki Plywood Manufacturing Company Ltd.  In his testimony, which is denied by the defendants, he  says that the Japanese Directors visited him in July 2003 and explained that Tufail wanted to replace him as Managing Director and that they would have to comply:

“I was … informed by the Japanese Shareholders that they intended to support Datuk Tufail to protect their foreign investment in Sarawak as Datuk Tufail is an influential man in Sarawak”.

Indeed throughout his evidence Ting makes clear that Tufail has habitually exploited his position as the brother of the Chief Minister in order to extract money and favours from his business partners and this case is just one example.  His ability to exploit his position in this way has relied on the 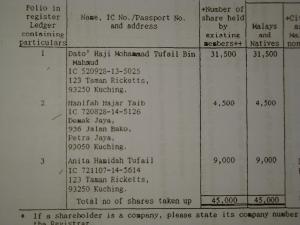 fact that everyone knows that the Chief Minister abuses his power and authority to favour his family and will remove licences and permits from anyone who does not comply with their demands.

Ting states that once he was removed from managing the joint venture company’s affairs the Tufails organised a deal with Hamidah Trading in order to be able to cream profits straight into their own pockets.

The purpose of Hamidah Trading is officially expressed as being for “the provision of log handling services and the sales of  books”.  Ting says that once in control of the joint venture Tufail had ordered that Sanyan Wood Industries should in future only buy its wood supplies through Hamidah Trading.  This despite the fact that Hamidah was not only owned but also directed by himself, his own daughter and his niece, the Chief Minister’s daughter.

Purchasing wood is a job that professionals at Sanyan Wood Industries had previously managed directly and it is interesting to consider how it can be argued that college graduate Anita Tufail, socialite Hanifah Taib and indeed Tufail himself (who had not held an executive role in the Sanyan Group until this point) could do a better job! 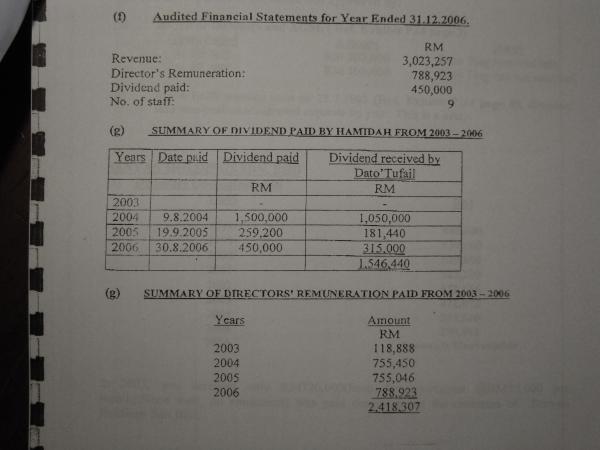 There is also the obvious question as to how a group of Directors of Sanyan Wood Industries could justify setting up  a new company in order to pay themselves to perform a task they had already been carrying out in their existing capacities? 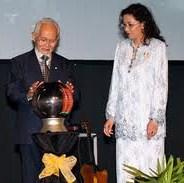 The Defendents in the case have argued that Hamidah Trading was doing a legitimate job for Sanyan Wood Industries, however Ting alleges that, to the contrary, the only point of Hamidah Trading was to offer Tufail and his family a chance to divert the profits of Sanyan Wood Industries into their own pockets when they should have been paid as dividends to its shareholders in Japan and elsewhere.  If this is the case the Tufails have used their positions as Directors of the joint venture to defraud shareholders, which is a serious offence.

In support of his claims Ting shows that in 2007  he managed to have the company’s accounts inspected by an approved auditor who:

“reported that a huge amount of the Company’s profits had been diverted by Tufail to Hamidah Trading Sdn. Bhd.,  a company fully controlled by himself and owned by himself and his family members.  One of the shareholders includes the daughter of the Chief Minister of Sarawak”.

Ting provides figures listing the revenue of Hamidah Trading for 2003, 2004, 2005 and 2006 showing an income of over RM43 million and RM86 million for the first two years, before sharply diminishing.  The figures show that the Directors paid themselves handsome renumerations and dividends amounting to RM 4.  He claims:

“I am advised by my solicitors and verily believe, that Hamidah Trading is a related intermediary company incorporated by Tufail to recieve profits from the Company [Sanyan Wood Industries]”. 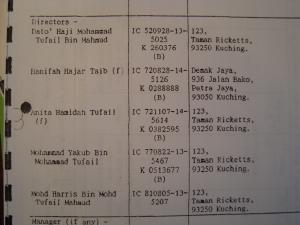 In response to these allegations the Japanese Directors and Tufail all deny that Hamidah Trading has made fraudulent profits from the company. They insist that the margin between the declared purchase price of the logs and the sale price on to Sanyan Wood is relatively small and, given the connections of the defendents, it is perhaps no surprise that the court has so far found in their favour.

However, Ting has appealed against that judgement and whatever the outcome, onlookers will continue to be baffled by the need for Hamidah Trading, whose only activities have been registered as the “log handling services” performed for Sanyan Wood Industries and the purchase of books for another ‘related party’ Wisma Printing Sdn. Bhd.

Ting says that his removal from the company that he built up was driven purely by greed and an abuse of power on the part of Tufail Mahmud.  However, these issues will not be part of any investigation by the Tokyo authorities, who will be looking only at whether Japanese shareholders have been deprived of their rightful dividends because company profits have been milked by unscrupulous Directors.

It will not help the mood of those shareholders that from 2005 through to 2008 Noda Corporation announced a series of profit shortfalls and extraordinary losses.  At the end of 2008 the company lowered its divendend forecast from JPY3.00 per share to JPY0.00 per share!  Investigators may be wondering to what extent those losses were the result of the transfer of company profits into the bank accounts of Tufail Mahmud, his daughter and niece (the daughter of Sarawak’s Chief Minister)?