Corruption And Abuse of Power – Irrefutable Evidence Against Taib. Exclusive! 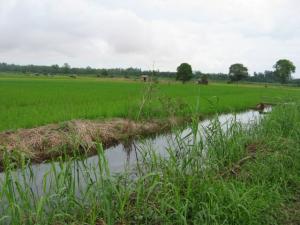 Land from the people - profit to the Chief Minister

Certain people in high places are given to alleging that the facts which have been published in Sarawak Report may not be true.  Yet, the allegations we have published have been verifiable and documented.

Likewise, available to the Malaysian Anti-Corruption Commission in the government’s own register of companies, is the following irrefutable information. The company Mesti Bersatu is a major shareholder in Delta Padi Sdn Bhd, a venture that has caused shocking devastation on the mainly Melanau island of Pulau Bruit.

Also documented and verifiable is the fact that the Sarawak government has handed large tracts of land in Sungai Lengan on Pulau Bruit at minimal cost (RM78,000 for 100 hectares) to Delta Padi Sdn Bhd to develop a rice project, for which laughable levels of compensation have been offered to the Native Customary Landowners of the area.  Pristine Mangrove forests have been destroyed over the past four years and the waters of the region have been polluted.  Environmentalists are concerned that the development is now illegally encroaching also on the National Park on the island. 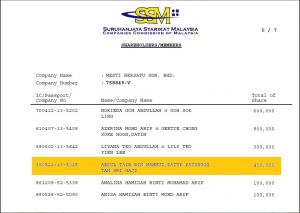 The Chief Minister's shareholding is stated in the Register of Companies

Mesti Bersatu, which is such a large shareholder in this enterprise, belongs to the Chief Minister of Sarawak, Abdul Taib Mahmud and members of his family.  His name is printed in black and white as a key shareholder in the Register of Companies for all to see.  This means that as the  Head of Government he has been handing the land and development opportunities to himself.

Mesti Bersatu’s two partners in Delta Padi are Taib’s business crony Hii Yu Peng and the organisation Pelita, which belongs to Sarawak’s Land Custody and Development Authority (LCDA), of which Chief Minister Taib Mahmud is also the Chairman!  This is all in black and white – there can be no argument.

It should be observed that the Sarawak Government has given these grants of valuable land to Delta Padi thanks to specific decisions by the Planning & Resources Minister and, of course, the Chairman of the LCDA. These key decision-making positions when it comes to the granting of land are both occupied by the Chief Minister, Abdul Taib Mahmud.   Therefore, Taib has particularly used his position of direct authority over these departments to hand himself cheap land, which he had alienated from the native people.  This is a clear case of conflict of interest, abuse of power and corruption.

However, it has not just land that Taib has been handing to himself through to Delta Padi Sdn Bhd.  Both state and federal government money is also evidently being poured into supporting the venture, of which he and his family are such major shareholders.  These resources will have been made available thanks, of course, to the decisions of Sarawak’s Finance Minister.  Sarawak’s Finance Minister is also Abdul Taib Mahmud.  This is another clear case of conflict of interest, abuse of power and corruption.

In an announcement to the news agency Bernama in 2004, the Minister James Masing explained the Sarawak Government’s policy towards the project – a policy that is spearheaded by the Chief Minister, Finance Minister, Land & Resources Minister and Chairman of the LCDA, who are all Abdul Taib Mahmud.  The report quotes Masing:

‘“Since Sarawak is basically in its early stage of rice production, subsidy must be provided for it to succeed.”  He [Masing] said his ministry would act as the main co-ordinator between the various state and federal agencies and ministries involved in order for it to succeed.

On the Delta Padi Plantation, he said since its inception seven years ago, a sum of RM18 million had been spent in its development.  It had also invested RM8 million on its own rice milling facility the biggest in the country ….  Masing said the state government would assist Delta Padi in dealing with its main rat and bird problems and in looking for more markets for its rice.   He urged the national rice board or BERNAS to lend a helping hand”. [James Masing, Bernama 18/10/2004] 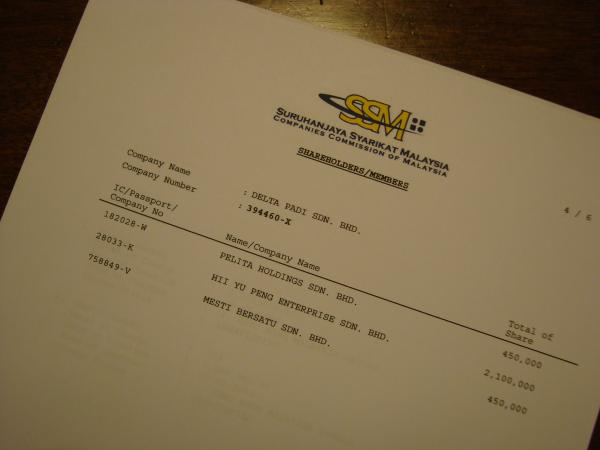 No proof? The Chief Minister and his family own Mesti Bersatu 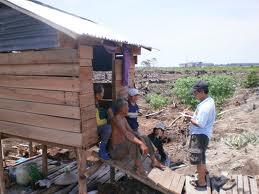 Progress and Development? - 6 years after Taib took their land and stripped their forest these locals are left destitute.

The above information is all verifyable to the Malaysian Government and the MACC through the Register of Companies, their own official documents and ministerial announcements.  The  government auditors will be well-placed also to assess just how much Federal and State money has in total been poured into helping Delta Padi develop the project, in which the Chief Minister and his family hold a such a major shareholder  interest.

In this context they might like to consider how little of those substantial millions have been spent in assisting the desperately poor Melanau and Iban populations of the area who have lost their fishing and hunting grounds and are suffering flooding and pollution as a result of the degradations and plantations on their Native Customary Lands?

So what is not true?

Therefore Sarawak Report would like to enquire on what basis BN commentators care to suggest that our accusations might be untrue and on what basis the MACC is refusing to investigate the State of Sarawak’s Chief Minister for abusing his powers to enrich himself and his family? 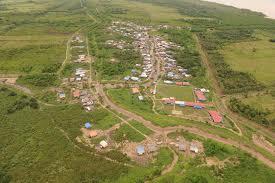 Perhaps it is because it would appear that the members of the BN party have a highly undeveloped understanding of what forms corrupt practice?  In an interview recorded last week, Taib’s political ally, YB Karim Hamza, attempted to justify the Sarawak State Government’s current White Paper proposals to clamp down on media outlets like Sarawak Report, with a series of statements that have caused hilarity throughout Malaysia and abroad.

While complaining that the reports on Taib’s wealth are not proven, Hamza’s simultaneously sought to justify it!   It would surely be “unfair” he argued for the Chief Minister not to be able to take up the “opportunities” provided by his office for example to buy “cheap land” if someone were to offer it to him?

Hamza further articulated at length how public office is regarded by himself and fellow BN members not as an opportunity to serve the community, but as an opportunity to get into business at the same time and to make money from the “connections” that arise.  Mixing politics and business in such a way is essentially the dictionary definition of political corruption and Hamza has openly admitted to approving it.

In the interview, which can be heard on Radio Free Sarawak via it’s website http://www.radiofreesarawak.org/ he frequently declares that it would not be “fair” if only businessmen and not politicians could be wealthy and “fly around in jets” and asserts that the families of politicians must of course be advantaged by using their resulting ‘network’ of connections.  He also slanderously implied that Prime Ministers in the UK and USA do the same and are “all filthy rich”. 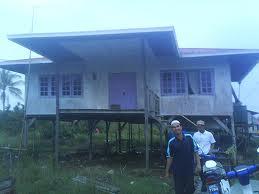 Taib took the 'opportunity' to make millions, but what was in it for the Melanau voters of Pulau Bruit?

Since Abdul Taib Mahmud, who receives a modest official salary appropriate to the concept of public service, is clearly wealthy beyond imagination; since he puts endless government contracts the way of his family; since he demands large sums of money and shares from any business that seeks to gain a licence to operate in Sarawak and since he also flies around constantly in private jets, we can only conclude that the Chief Minister agrees one hundred percent with Hamza’s justifications of corruption.

It is clear that Mesti Bersatu’s involvement in the Delta Padi project forms one of the ‘business opportunities’ of the sort that YB Karim Hamza was referring to.  Crony business tycoon Hii Yu Peng evidently provided the Chief Minister with an ‘opportunity’ to take a stake in his venture to turn the Native Customary Rights Lands on the pristine island of Bruit into a paddy project.

Mr Hii Yu Peng has of course put in most of the private capital into the venture, true to the pattern of all Taib’s dealings with local towkeys in search of land and licences, which he totally controls.  Indeed it is extremely unlikely that the Taib family company Mesti Bersatu has contributed a single penny to Delta Paddy in return for the quarter of all the shares that they have acquired.

A further quarter of the shares are in the hands of the state agency Pelitia, most likely pending a suitable time for their ‘privatisation’ into the Taib family clutches, after the need for more state funding has passed (keep reading Sarawak Report for further evidence on this practice).

In return for this private investment by Hii, the State Government and in particular the LCDA department of which Taib is Chairman, has granted an eye-watering level of ‘opportunities’ to Delta Padi.  These ‘opportunities’ also noticeably escalated in the aftermath of the incorporation of Mesti Bersatu in May 2007 and its involvement in the Delta Padi project. 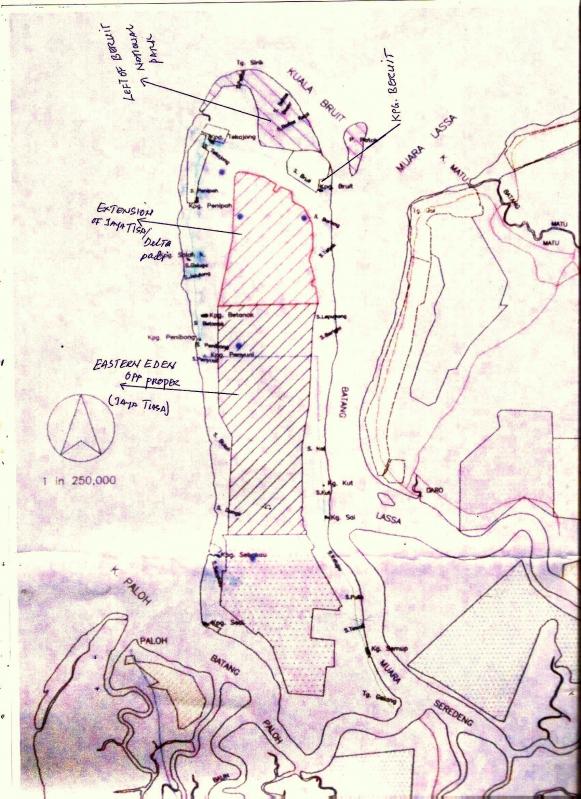 Carving up Pulau Bruit - the map is wrongly labelled as Delta Padi does not belong to Jaya Tiasa, it belongs to Taib

Sarawak Reports researches have now identified the following plots mainly in Pulau Bruit, as having been handed to Delta:

2 plots in Sungai Buloh (acquired 1999) amounting to around 300 hectares for nothing.

The recent extension of the lands handed to the Delta Padi venture has now sparked a legal action by 8 Native Iban villages, who will be represented by the human rights lawyer and PKR leader of Sarawak Baru Bian.  Mr Bian will most likely be surprised to discover that he is to be challenging the Chief Minister himself in this civil case, as locals were misleadingly informed that the company behind the Delta Padi project was Rimbunam Hijau, presumably in a mishandled attempt to hide Taib’s involvement.

Sarawak Report is wondering when such civil cases against the Chief Minister will finally give way to more appropriate criminal cases in the Federal Courts of Malaysia, given the evidence of this and numerous other cases of corruption by BN in Sarawak?