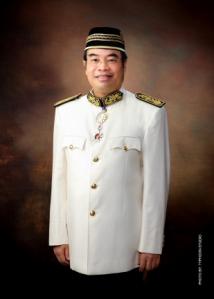 Sarawak report can reveal that a number of BN’s political state representatives have changed their religion and accepted new names.  However, they are hiding the fact from their constituents!  Among them are YB Efendi bin Abdullah, who is still publicly known by his original name of Sylvester Entrie.

An angry Efendi Abdullah was challenged on the matter during a radio interview earlier today.  The independent, Iban broadcaster Radio Free Sarawak had called the politician to ask for news about the welfare of flood victims in the area he represents in Marudi.

However, the politician appeared to object to speaking to the radio station and repeatedly queried the DJ’s popular name of Papa Orang Utan.  He also refused to speak in Iban or Malay, the main languages of his constituents.

“I do not have to publicise, if you want to know you go to the ground and then see what is going on”, he barked at the DJ.

However the persistent interviewer said that worried listeners wanted to know what was happening to friends and relatives.

I do not have to inform constituents

“Never mind, never mind” responded the State Representative “It doesn’t matter, I don’t have to worry whether they want to know or not, because I am doing my job on the ground…. As far as I am concerned when I went there some of them have already called their relatives and it is not for me to publicise it!”

Clearly provoked by accusations of impoliteness over the failure to provide his real name,  the DJ then let the cat out of the bag about the State Member of Parliament’s own name secret.

Entrie/Abdullah has been suspected by insiders for seeking to conceal his conversion to the Muslim faith in order not to alienate constituents, who might suspect it was politically motivated and an attempt to gain promotion.  His response to the challenge was angry and possibly unwise.

“But I thought your name is YB Effendi Abdullah also?” [Pause].

“There is no point getting angry, don’t be angry with me”, the DJ can be heard protesting.

“No, no you see you go to my personal thing!  Whether I am Effendi bin Abdullah or Amat bin Abdullah or Crocodile bin  Abdullah that is up to me!  Is that the way you journalists want to go!”  At this point he abruptly ended the call shouting “there is no point to talk to you thank you!” 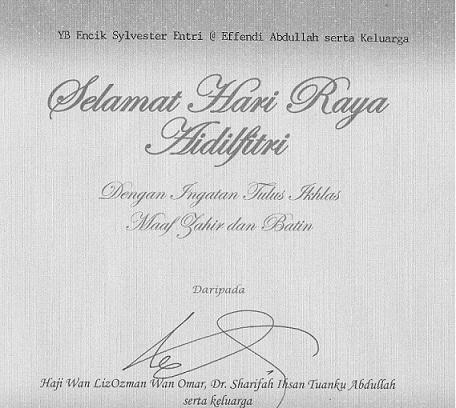 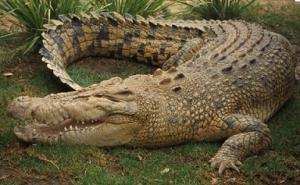 The interview, which is due to be broadcast at 6pm 0n Friday on 15420 kHz (SW) and then at 8pm on 6205 kHz (SW) and can also be accessed at all times via podcast on www.radiofreesarawak.org, has now effectively ‘outed’ Sylvester Entrie/ Effendi bin Abdullah/ Crocodile bin Abdullah as a shy Muslim convert.   Sarawak Report can confirm that Effendi bin Abdullah has been the official name by which he has been addressed in Sarawak Government circles for some time (see photograph of a recent greeting card addressed to him).

We can confirm there are other closet converts among BN’s State Representatives and we advise them to come out and come clean, since the fresh air of publicity is blowing their way!