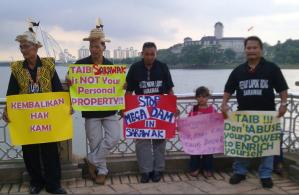 They were ignored by the government-controlled press, of course, and moved on by the police, but a remarkable group of protesters made their way from the distant Baram River to central K L last week.  They were speaking up against Taib’s plans for the Baram Dam, which will destroy yet another huge swathe of Sarawak and displace tens of thousands more indigenous people from their forest lands.

Organisers say there were around 30 people in total, including children.  Some had made the costly journey all the way from the Long San area in the Baram River basin.  One of the spokespeople, Willie Kayan, himself a Berawan, said that many of the affected tribes were represented in the small group.

“We were simple, poor people.  Kenya, Kayan, Berawan, Malay and Iban.  Sadly we could not raise enough money for any Penan to join us” he told Sarawak Report. 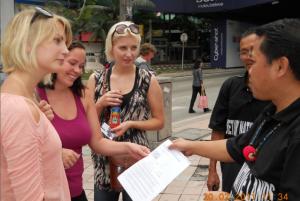 For these desperate people, who were so determined to get their message out, the journey involved an 8 hour ride on the back of trucks down the battered logging roads to Miri and then the flight to Kuala Lumpur, where they spent the following 3 days walking with their banners around the town.  They protested outside the airport, in China town and through the streets and then came to the Central Market Place.  There was plenty of interest and curiosity from on-lookers and tourists they told us, but the local media studiously ignored their presence.

On the other hand and not surprisingly the small group found themselves the subject of continuous scrutiny from Special Branch and plain clothes police who tracked their movements.  This is why what they did takes courage for Sarawakians, because the consequences will be uncertain.  When a crew from TV Selangor (the state which is run by the PKR opposition) did come to film them in the market place the police made their move.  Both the protesters and the TV crew were rudely interrupted and pushed out of the area.

“The people in the market were very interested, they took pictures and asked us questions and took our leaflets” says Kayan “But then we were forced to go” 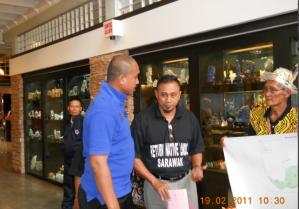 Interrogated by plains clothes police and then moved on 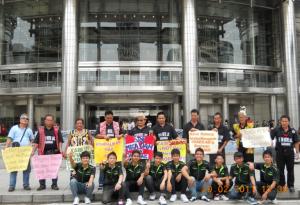 Start of the backlash?

The courage and desperation of the small group should not be under-estimated.  But their gesture is a sign of big changes in Sarawak as the local people, who are normally shy and self-reliant, have started to react to the intolerable pressures of Taib’s land grabs.   There is no need for the Baram dam or indeed the 12 other dams that Taib plans to build with a loan of US $11 billion that has been offered by the Chinese, who are also providing the workers and engineering behind the massive project

In fact there is not even any existing requirement for the enormous Bakun Dam which is currently flooding an area the size of Singapore along the Rajang river.  That project has already displaced 10,000 native people, who are suffering hardship and destitution in resettlement areas where they have no access to the food and products that once sustained them from the jungle.  None of the promises that were made to these communities about better lives and prosperity in return for their lands have been fulfilled.

Now half a million other indigenous people are in fear of the same disaster  befalling them as they are forced from their lands to make way for Taib.  Might it be that the show of defiance by the people of Long San will be the beginning of the reaction against Taib.  Till now he has strong-armed his way into grabbing huge areas of native territory for his own enrichment, but the vast extent of these latest projects indicates a greed that has grown out of control.

Getting too greedy – and getting found out 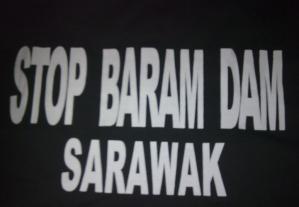 You need to stop Taib first!

Taib and his family and cronies stand to make billions from the dam mega-projects.  This is why they build these white elephants that nobody needs and destroy the people’s lands.  However, it will be the people of Sarawak and their children who will have to find the money to pay back to China in their taxes and in their lands and resources.

The people of Sarawak are coming to understand what Taib has been doing to them and their country and to realise that his greed is getting worse the richer he gets.  “When these people arrived in KL they were amazed at all the tall buildings” says Willie Kayan. “They asked me where did all the money come to pay for the Petronas Towers?  and I told them this money came all the way from Sarawak from our oil and gas of Sarawak.  They felt sad and angry and they took a lot of pictures”. 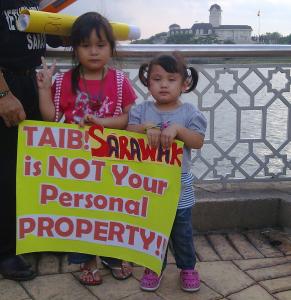 The protesters from Baram took information to the people of KL, but they will also be bringing information back to their own people of Baram.  Information about how under Taib Mahmud their country has been stripped of its resources and how while they live in desperate poverty that wealth has gone elsewhere.