The Chief Minister, Taib Mahmud clearly has no intention of allowing the democratic process to get in the way of his election chances.  Sarawak Report has obtained exclusive video material showing how police were sent in to prevent the opposition PKR leader Baru Bian from addressing a peaceful gathering of people from his own constituency.  We have also learnt that Taib has sent out a disgraceful directive instructing police to deny permits for any opposition gatherings!

The incident happened in Baru’slocal main town of Lawas.  An invited gathering of party members and constituents had joined him at the Sin Yang coffee shop to take food and listen to his vision of a better future.  These key constituents wanted to listen to his messages and ideas in order to bring them back to their own communities and longhouses.  PKR party workers had, as usual, applied for a permit for the sit-down gathering, but as usual the permit had been denied.

Our orders are from the Top!

PKR officials say they felt they had no choice but to proceed with the meeting.  “By refusing us a permit they were interfering in our democratic rights” continued Paul, who is Baru’s brother and a long-term political ally of the human rights lawyer. He went on:

“Our rights have been denied.  This is a democratic country and everyone has a right to give their opinions and a right to meet together and give the information that we can’t give to the people any other way.  We in the opposition are not given any media coverage” 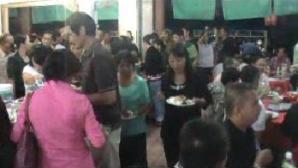 Peaceful and seated gathering, soon to be disrupted by police who feared to let Bian speak

Baru Bian, who has shaken Taib’s authority on numerous occasions over the past two years by winning a series of crucial land rights cases on behalf of communities fighting against the Chief Minister’s land grabs, only just missed out on winning the seat at the last election in 2006, despite enormous odds.  At that time Bian started legal proceedings which detailed a long list of corrupt practices used by BN to win the seat by just 200 votes.  These included bribery and vote-rigging.  Taib-controlled judges, of course, immediately dropped the case on the excuse of ‘ legal technicalities’.

PKR rightfully believe that Bian should have the absolute freedom to speak to his people, who are from his native area.  They say the fact that Taib is resorting to such dirty tactics and abusing the authority of the police at such an early stage in the election is a sure sign that he is fearful that opinion in Sarawak has turned firmly against his authoritarian government. His 30 years in power have brought great wealth to his family, but only poverty for the longhouse people, whose lands he has taken for timber and oil palm.

Witnesses say that the guests to the event started arriving at around 7 oclock in the evening and sat down to enjoy some initial refreshments.  Many of the several hundred people who turned out to listen to Baru Bian had travelled very long distances from the longhouses.  It had been raining all day and the journey in some cases took several hours, but they had been undeterred.  According to one report received by Sarawak Reports, some poorer people, who had come the day before, had had to sleep out in the open. 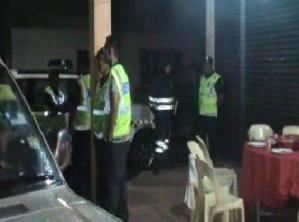 Police start to surround the event and turn away guests

By 7.15 pm, according to the organisers, a substantial contingent of local police officers had started to arrive.  In all witnesses say there were around 20 uniformed police and another ten plain clothes officers from Special Branch.  Their presence cast a threatening shadow over the meeting and they started turning away later arrivals and surrounded the building.   Paul Bian explains how his original plan had been to show a video to the people at the beginning of the meal – it was an information film about Baru and his mission and policies for transforming Sarawak into a fairer society.  However, the police prohibited the showing of the film.

“We appealed that there is no other way to communicate.  We explained that we dont get media coverage or newspaper coverage or TV coverage, so couldn’t they just let us show this?” says Paul.  “The police boss was sympathetic, but he replied that he was taking orders “from the top”!  that means either the Police Chief or the party bosses”

Bian had originally lined up three interesting speakers to address the gathering, “I had the community leader Pemanch Jenging anak Radin, who has defected from BN after his land was grabbed and also Abun Sui, the land rights lawyer who has won key cases in the area and last it was to be Baru Bian”.  However, with the police pressure mounting he says he decided to cut straight to the key content of the meeting and the speech from Baru Bian. 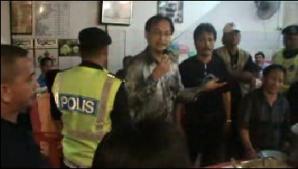 A hand on your shoulder Tuan!

As our video shows how Baru had hardly got to his feet before the police marched up to him and “placed a hand on his shoulder”.  There was a policeman on either side of him and five had followed behind to where he was standing, according to Bian.  They told him he was “not allowed” to speak.   Witnesses say it was a frightening moment because members of the crowd became angry.

“We are a thousand so its 30 to one!” was one of the cries, explains Bian

For this reason, as the video shows, Baru took responsible action in circumstances where a large frustrated gathering could have taken their anger out on the police.  He calmed the crowd and encouraged them to understand that it was better to cooperate with the police, rather than to allow the danger of violence breaking out and someone getting hurt. Without Baru’s diplomatic leadership the event could have degenerated, because of the unnecessary provocation of the police.

For these reasons the angry crowd were forced to return back to their longhouses without having been allowed their democratic right to hear their local candidate! 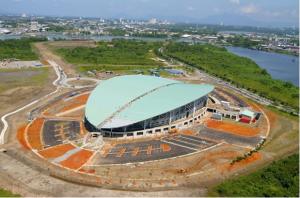 Borneo Convention Centre - laughably designed to look like a leaf in deference to the environment!

Meanwhile, on March 5th Taib Mahmud plans to hold his own Party Convention rally for 5 thousand people in the Borneo Convention Centre in Kuching, for which it will be no surprise to learn the BN party had no problems in obtaining a police permit!   Sarawak Report assumes that none of the speakers at the rally will be referring to the corruption surrounding the building of the Borneo Convention Centre, which was commissioned by the Chief Minister and handed to the company PPES works, which is the “construction arm” of his own family company CMS!

Heading the Board of Directors of CMS is Taib’s own son, the youthful and fashionable Mahmud Abu Bekir Taib, who is also the largest shareholder.   Until her death the previous largest shareholder of this multi-million ringgit concern, which is quoted as a public company, used to be his Mum, Laila Taib!  Her husband (his Dad), the Chief Minister has consistently channelled most of the top state contracts through his own family company for the past 3 decades.  For this reason the share price of the company has shot up in past months in anticipation of all the money the government is saying it will be spending on SCORE projects!

PKR say that the discriminatory and anti-democratic behaviour of the current government on this and other matters is clearly proving to be counter-productive.  “The people were not intimidated, but they were angry”, says Paul Bian.  “This event opened the minds of the people to what is going on and it made them very, very bitter.  Since this event Baru Bian has been getting more and more offers to come and speak to villages in the region.  They say ‘come speak to us any time’.  This has not made them scared, it has made them become more resolute against the malpractices”.

BN may yet discover that disappointing and angering the electorate is no way to go about winning elections.  People are concluding that BN fears the opposition leader so much they dare not let the people hear him speak!