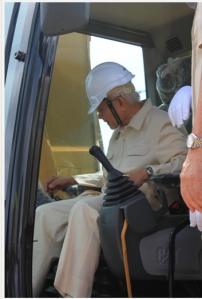 When did this old boy last get to drive himself? let alone in a digger! Ground breaking ceremony for his company's 'fortuitous' contract to construct the Taman Tunku - Taman Jelita road!

At the end of last year, during a ground breaking ceremony for the new Taman Tunku – Taman Jelita road in Miri, Taib Mahmud launched into his new big theme of condemning ‘envy’.  As one onlooker recalls, the Chief Minister said:

“Sarawakians must reject politicians who perpetrate “anti-rich people” sentiments as this will only deter the state’s quest for greater progress”.  [ http://lifeisreallybeautiful.com]

By this we can conclude that the Chief Minister does not like critics who question his enormous wealth!

The Chief Minister has continued to warm to this ‘our wealth benefits you’ theme on numerous occasions since, stating that his own multi-billionaire status and the enormous wealth of his family are good for the rest of the people.

Therefore, what better study to make of his claims than the very project he was launching on that day?  The nature of this ‘enterprise’ is a perfect example of how the Taib family has become rich.  However, it has very little to do with hard work, cleverness or inventiveness and everything to do with the corrupt exploitation of Government office by Mr Taib Mahmud. 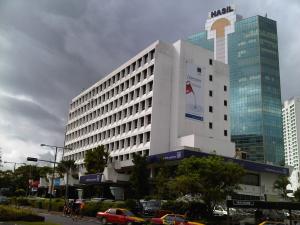 The road involved in this ground-breaking ceremony was, as the BN controlled Borneo Post describes it, a “RM 18 million access road, fringing the runway of Miri airport to be built by developer and landowner Kampulan Parabena Sdn Bhd”.  The article goes on to explain that the Managing Director of Kumpulan Parabena is Taib’s sister Raziah Mahmud.

While the rest of the world wonders how the sister of the Chief Minister is in charge of a company that has received this chunk of state land and a state funded contract of this nature without a major issue arising over conflict of interest, the Borneo Post goes on to say that instead:

” Parabena is also mulling the proposal for a university campus, polyclinic and other infrastructures in this strategic location”

So, it is clear that if Raziah would like to be given state money to perform such projects (or at least sell the projects on to a real construction company to perform), then the option is hers!  Experience would prove this to be the case, since Parabena has received an extraordinary number of contracts of this nature. 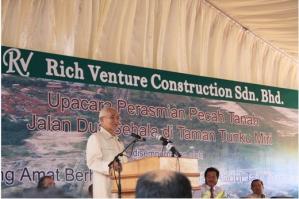 Chief Minister launches the road project. Rich Venture is the company owned by crony Hii King Chiong, which was sub-contracted to do the actual work by Taib's own company Parabena!

Sarawak Report has already documented how Kumpulan Parabena has been the recipient of hundreds of millions of ringgit worth of State and Native Customary Rights lands over recent years, usually under the thin disguise of numerous ‘front companies’ based at its office address in Kuching.  However, there can be no greater scandal than that attaching to the land that it has acquired in the prime airport area in Miri and in other prime sites in Sarawak’s key oil town. 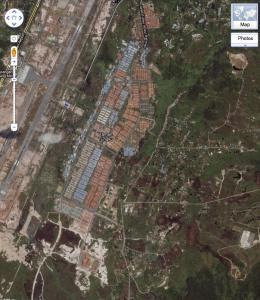 Prime airport location - given to Raziah and then sold off to others to develop!

Soon after he took power Taib handed an original 800 acres of this prime land to his own family company Concordance Holdings in November 1982.  This was later transferred to a Parabena, which is a subsidiary and then, according to the Borneo Post extended to a total of 2,000 acres of prime development land.  After 30 years of profitable housing development, which has reaped millions in profits for Raziah Mahmud, the project is now moving into its second phase, hence the need for the new government-financed road to get to the next part of the site.

People from Miri have explained to Sarawak Report that the original excuse for the land handout was that it supported a Bumiputera company, in order to develop local skills.  However, Managing Director Raziah Mahmud soon succumbed to the get rich quick alternative of selling on the land she had got for free for a fat profit to genuine developers like HSL – or, as in the case of the current road project, Rich Venture Construction Sdn Bhd, owned by the crony tycoon Hii King Chiong!

Who are the beneficial owners of Parabena?

Bearing in mind that the 2,000 acres involved are prime state land that has been largely given for free to Kumpulan Parabena thanks to the decision of the Minister for Resources and Planning, Abdul Taib Mahmud (one of his many key offices of state), it is worth pointing out the shareholders of this company. 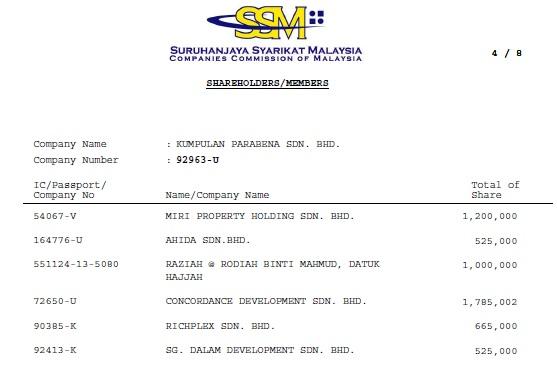 Family company. All these shareholder companies are owned by the Taibs. Taib himself owns a stake in Kumpulan Parabena through his personal registered shares in Mesti Bersatu, in turn an owner of Miri Properties and Dalam Development!

It turns out that the Chief Minister himself is personally one of the key shareholders of Kumpulan Parabena through his stakein Mesti Bersatu Sdn Bhd, which in turn holds shares in Miri Properties and Dalam Development.  Concordance Development, another shareholder in Parabena, is owned by CMS, the Taib’s main family company!  The other shareholder companies are all owned by members of his own family, in particular his sister Raziah and her third husband Robert Geneid. 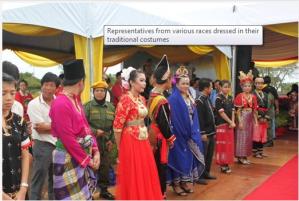 Native people are marshalled in to decorate Taib's ground-breaking ceremony but what benefit have the natives received from the taking of their lands for developments like this?

Mesti Bersatu (and therefore the Chief Minister) is also a major stakeholder in the controversial Royal Mulu Resort, which has likewise benefitted from free land ‘alienated’ by Taib from the Native Customary Landowners of the area, as well as from massive state subsidies, again thanks to his decisions as Chief Minister and Finance Minister!

It is therefore only appropriate to question why Taib refers to the concept of useful enterprise in the context of Kumpulan Parabena, a family company which has flourished not out of hard work, but solely from exploiting government connections to grab land and contracts, which are then sold on for others to do the actual work?

Secondly, what good it has done for the wider population of Sarawak that the Chief Minister and his family should have made so much money out of doing nothing but profit from the appropriation of huge tracts of land grabbed by the Chief Minister for himself?

How did such a corrupt acquisition of wealth benefit others and why is it wrong or indeed ‘envious’ to question and criticise this theft by the Taibs? 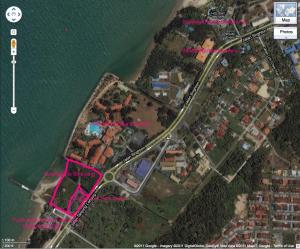 Prime site by the sea, handed by Taib to Majupun Sdn Bhd, another family company. The Chief Minister himself owns indirect shareholdings in the company!

Of course, Taib’s smug appearance at his sister’s ground-breaking ceremony in Miri is just one example of his series of ‘enterprising’ activities all over Sarawak.  Another major development in the town provides a further sickening example of the Mahmud family’s destructive greed.

In the early 1990s Taib’s acquisitive eyes fell upon one of the city’s prime sites by the sea, Taman Selara.  This was the gracious area occupied for over a hundred years by the traditional Residency, the District Officer’s house and the District Medical Officer’s house.  The three buildings were classic heritage buildings that defined the town and they adjoined a public park – all in a prime part of the city.

Taib grabbed 20 acres of this public recreation land for himself in order to develop what is now the modern Marriott Hotel.  The site also absorbed a public car park, in which the local council had just invested a million ringgit of public money, which was then destroyed. Raziah, who is the Director of the project, promised the Mayor to pay compensation, but 20 years later the City is still waiting!

The company, to which the site was then given for a nominal amount, is Majupun Sdn Bhd.  The Directors of Majupun are again his sister Raziah, her Australian-Lebanese husband and Taib’sdaughter Hanifah.  Once again the shareholders of Majupan are two Taib family-owned companies, Noble Strike Sdn Bhd, and Bakraz Holdings.  And once again the Chief Minister himself holds a substantial interest in the companies through his shareholding in Mesti Bersatu and Miri Properties and Kumpulan Parabena! 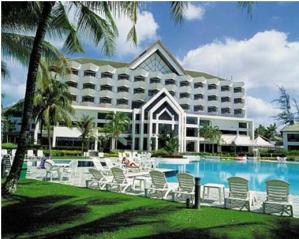 Owned by the Taibs. The Marriott in Miri.

In this manner Taib grabbed for himself and his family members one of the largest and most valuable parts of Miri, which the Marriott Hotel Group has been pleased to run on his behalf (this US company will soon also be taking over the management of the Taib’s equally corrupt Royal Mulu Resort, which is laughably described as an ‘eco-tourism’ venture).

Taib even managed to make a huge profit from selling on a fifth of the enormous Taman Selara site – 4 acres of prime territory that he had taken from the public – for RM 12 million to the crony company Shin Yan, which is currently building another three blocks of high-rise condominiums on what was once Miri’s most attractive part of town and a public parkland.

Again Sarawak Report asks where is the ‘enterprise culture’ for which Taib seeks applause and who else benefits but himself? 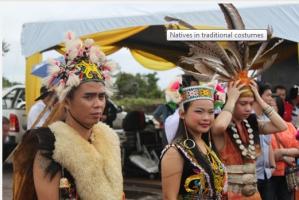 Losers - not the kind of 'entrepreneurs' Taib is looking for. Dragged out to applaud the ceremony and Taib's wealth.

The hypocracy of the Taman Tunku – Taman Jelita Road opening ceremony did not prevent the organisers, doubtless funded by Parabena’s crony sub-contractors Rich Venture, from fawning over the kind gesture of Raziah Mahmud in providing her own planned new development with a road funded at the public expense!

Chinese Dragon dancers and native men in women in costumes were brought in to celebrate the wealth of the Mahmuds and to listen to Taib’s lecture against criticising wealth such as his own!

Clearly, this act of abasement by his people is what Taib would describe as the benefit they have received from the vast wealth of people like himself!  However, that wealth was acquired from robbing these people’s lands and raiding the finances of the state!

In a crowning act of quite disgraceful and patronising treatment of his own deprived and impoverished people, the Chief Minister then saw fit to oversee the throwing of food packages at the drummed-up crowd of onlookers.  These people were then photographed as they humiliatingly scrambled to get what they could from the scraps of the Chief Minister’s ill-gotten wealth! 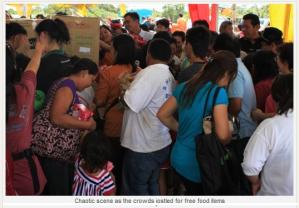 Scrambling for food parcels thrown out during the ground-breaking ceremony!

Likewise, the Chief Minister will surely expect to be gratefully received by the voters of Sarawak when he just as patronisingly tosses them RM50 ringgit each of their own stolen wealth in an attempt to purchase their votes in the next few weeks.  Sarawak Report suggests that the people no longer allow themselves to be bought so cheap just because their Chief Minister has kept them so poor.  We remind them that the Chief Minister has billions of their money locked up in bank accounts that should be released to bring them the benefits of schools and healthcare and electricity and roads, all of which the Chief Minister has been too greedy to provide!