A breath-taking duplex penthouse with spectacular views in a top Sydney location.  The press leaped on the story when this apartment sold for a record Aus$20 million in 2008.  But who was the ‘undisclosed prominent businessman’ who had been able to afford Australia’s most expensive flat and who had sold it?  What we can be certain of is that the deal involved a certain ‘prominent’ family from Sarawak, more particularly Onn Mahmud, the brother of the Chief Minister.

Australia's most expensive flat, who could find the money to pay $20 million on one appartment?

We know that Onn was involved in the development or purchase of what is known as Ten Wylde Street, located in the prime Sydney harbour location Potts Point,  because of the evidence that was brought out in a court case some months before the story broke.  Onn was being sued for millions of dollars by a consultant who included in the bill his fees for the “development and management” of Ten Wylde Street.

Spectacular and expensive - can the Taibs outbid the rest of Australia to gain Sydney's most expensive flat?

The court case and resulting publicity came at a very difficult moment for Onn, because attention was at the same time being drawn to his vast and unaccountable wealth by the Japanese newspapers, who were following up a prosecution by their own tax authorities against local shipping cartels.  In 2007 the story was coming out that shipping companies had been paying un-declared timber kickbacks to a mystery company in Hong Kong that was plainly linked to Onn Mahmud.

Onn has a base in Sydney and had developed a number of business interests in the name of Kesuma Holdings, a company involving himself and his wife, son and daughter, however this was to shortly close down in 2009.

Quite astonishing luxury - the product of timber corruption?

When this property was brought onto the market it was marketed expensively on the internet and sold off-plan.  In fact the development was part of a refurbishment of an existing rather more old-fashioned, brick serviced-apartments building and the work is still in progress.  Just a few days ago the enterprise hit the news again when newspapers reported that the original sale deal had quietly fallen through and the original developers have moved on, selling the entire project for just about same price that this one flat was originally supposedly bought for – around $17.5- 20 million.  Did somebody have more money than sense during the property boom? 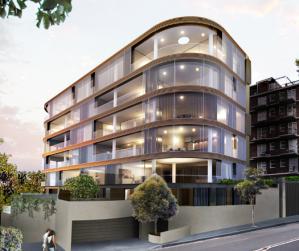 This is all off-plan imaging! A dream that is losing someone a lot of money…

Sarawak Report’s on the ground reporters in Sydney have told us that Ten Wylde Street is still very much an on-going development.  The website that advertised these glossy pictures at the time of the Aus $20 million dollar deal has now been closed down.

Needless to say, Onn Mahmud’s name has never been publicly associated with the project.  Leaving some to question whether he was the developer of the whole building project or just the mystery buyer?

What Onn Mahmud failed to deny however, when this whole matter came to court in mid-2007 and 2008, was that there had been work done on his behalf regarding the “development and management” of Ten Wylde Street, Potts Point.  It has left the rest of us questioning, where did he get all that money?