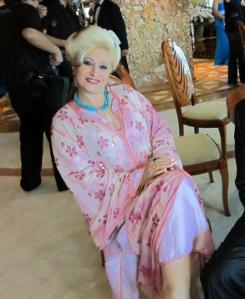 Out of all the astonishing secrets that are now beginning to emerge during the dying days of Taib Mahmud’s regime, one of the most bizarre has been his reliance on a blonde female witch provided as his Bomoh by his sister Raziah!

Taib has always been notorious for his consultation of black magic practitioners and after the death of his wife Laila, according to family and close friends, Raziah moved in to consolidate her influence by introducing her own in-house female Bomoh to him.

“The person who brings the bomoh becomes the controller”

Another family insider told us:

“The real Chief Minister of Sarawak is Raziah.  She has used black magic on him!” 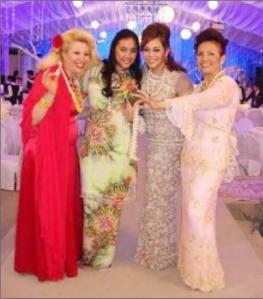 Stella, as she is known to the Mahmud household, is in fact an Australian of Lebanese extraction called Kharleen Tashman.  She was taken up by the Geneids in 2002 (reportedly from a gypsy community in Sydney) to become Raziah’s personal in-house black magic advisor!

Later, Raziah came up with an ingenious way of extending her power over Taib, by exploiting his grief over the loss of his favourite brother, Arip, who died of lung cancer in 2005.  According to family members, Stella pronounced that she had ‘transferred Arip’s charisma’ to Raziah, claiming that the younger sister now bore Arip’s spirit !

It seems to have been a short step away from inheriting his spirit to inheriting Arip’s former role as the main family business-partner and fixer for Taib (a job originally done by another brother Onn, who later fell out with Raziah and others in the family).

Arip, as we have already demonstrated in Sarawak Report, had benefited from vast chunks of land handed out  by Taib since 2000, much of it NCR territory.  Subsequent events would imply that Raziah now slipped into that lucky position of most favoured sibling.  The official data, now released on Sarawak Report, shows that out of all her brothers and sisters Raziah has received by far the lion’s share of state lands in recent years – we have calculated that an area at least the size of Singapore has gone to her.  Her daughter and husband have benefited also from handouts worth hundreds of millions of ringgit, according to recent land sales, and the jealousy amongst other family members is said to be seething! 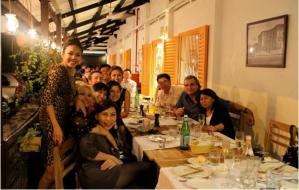 We have already reported on Taib’s addiction to the advice of a series of Bomoh’s.  Insiders have detailed how his home in Demark Jaya is stuffed with artefacts related to the practice of dark arts – shrines, statues and even symbolic birds, which roam free indoors.  Particularly chilling is the story of a black eagle that was kept within the confines of the house, on the advice of one of his Bomoh’s.

Our informants have described how Stella enjoyed a period of close influence over Taib, aided by the proximity of her dwelling in Raziah’s house next door.

“ Her signature ritual includes tip-toeing and howling” explains one close contact.  “Each morning she would cross through the garden from Raziah’s house into the grounds of Taib’s residence and would perform a ritual of chasing away evil spirits before the Chief Minister rose for his early run!”

Another bluntly told us:

“The latest mad excesses have been under the influence of Raziah.  She is the mistress of Sarawak, not Taib.  He has been possessed.  She took control the moment Laila died!”

Part of the inner circle

Stella’s presence at any number of key family events and close occasions has also been documented in a number of photographs, where she has posed with the family.  Elia Geneid’s wedding in 2010 saw Stella joining top guests, including the PM, at the exclusive event on a luxury yacht.  She has been photographed at numerous intimate family events and at grand occasions.  She even popped up at the Islamic Fashion Show last summer in Monaco, which was sponsored by Taib on behalf of Rosmah Mansor in a blatant attempt to curry favour with Najib in the run up to the current election. 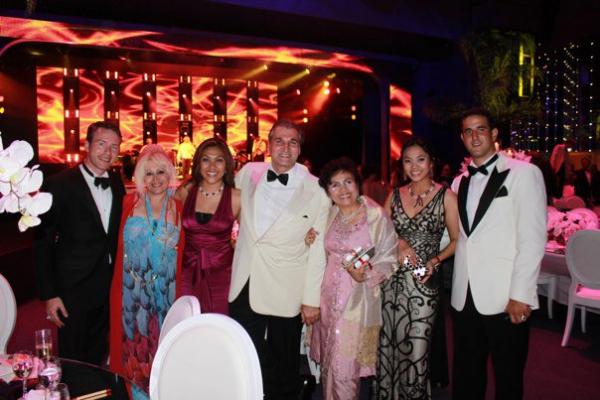 Lady in Blue - posing between Elia Geneid and her husband, with Robert Geneid, Raziah and second daughter with Lebanese husband at the Islamic Fashion show in Monaco

Another close insider has related to Sarawak Report how guests were shocked at her bizarre contribution to Taib’s daughter Hanifah’s own wedding ceremony.

“The bride entered the wedding hall and then suddenly there was Stella producing this weird hollering call.  Everyone was shocked, stunned.  It was some strange ritual!” 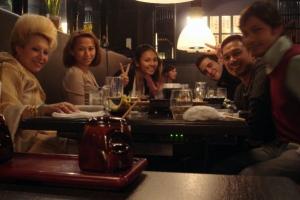 The amounts paid to Stella when she was at the height of her powers are gasp-inducing!  She would regularly receive RM100,000 per two month stay with Raziah.  She would then go back for some time in Sydney.  However, we have been told that on one occasion Tashman, who is a mother of four, received half a million ringgit for her services!

However, all good things come to an end and we understand that the female Bomoh over-reached herself when she tried to interfere in the conduct of Laila Taib’s funeral and fell out with Taib’s children.

Kharleen Tashman, we are told, has recently been superseded by another Lebanese lady, who is more powerful and alluring still – yet we have learnt that she too was provided by the ever-resourceful Raziah!

We are of course referring to Ragat Waleed al Kurdi, the Chief Minister’s extremely youthful new wife.  The origins of Ragat’s relationship with the Chief Minister, who was already in office at the time she was born, have till now remained something of a mystery to outsiders.  However, Sarawak Report can report via extremely close sources that she is in fact a niece of Robert Geneid, Raziah’s husband!

“Taib has come under the spell of Rosie (Raziah), she is controlling all.  She controls all the contracts and land handed out”

Complains one of our sources, voicing the growing jealousy and family resentment towards Taib’s youngest sister by the rest of his siblings.

Indeed, the rivalry is such in the family that it rarely lies far beneath the surface! The company Taib set up to run the family trust of Arip Mahmud, in which he holds a personal share, is called Mesti Bersatu – he gave it that name to remind his brother’s squabbling relatives that the family ‘Must be United’!

Raziah’s logic in steering her brother into this new marriage is not hard to determine.  The Mahmuds are desperate to revive the old man’s faltering image in order to stretch out their power longer in Sarawak and ensure a succession within their own flesh and blood (Taib infuriated Najib by putting up no less than 10 members of his family as candidates for his list for the election). 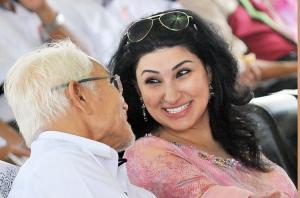 Under her spell? - Is Ragat Raziah's new power-base or a threat?

However, Raziah was clearly equally determined to cement the influence of the Geneid family over Sarawak’s future.  For her husband Robert Geneid, the son of an Australian fruit seller who had had a patchy business career, the marriage of his neice has been the consolidation of his growing hold over wealth and business interests in Sarawak since his union with the Chief Minister’s sister.

If BN win the up-coming election these will be the figures controlling Sarawak’s future, insiders warn.  However, Sarawak’s power-broking couple might find that the new young wife could turn out to be a good deal less pliable than the hireling Bomoh, Kharleen Tashman.  Firing her would surely be a far more complicated matter to perform?