We can predict one notable absentee from Taib’s pre-election political rally at the recently completed Borneo Convention Centre (just one of the major building contracts he awarded to his family company and put in the hands of his own sister Raziah).  The absentee will be his own son and Federal MP, Sulaiman Taib.  But Sarawak Report can perform a public service by reassuring people that the rumours that Sulaiman is dead are untrue. 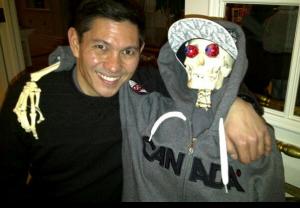 In what can only be described as a stupid stunt, Sulaiman Taib has posted a picture of himself on Facebook, posing as ‘Death’ rests a symbolic hand on his shoulder!

The Chief Minister’s younger son, who likes to be called Rahman when in North America, appears to have been responding to the widespread rumours that have been flying around Kuching for months that he is indeed dead! Judging from the sweat shirt worn by the skeleton figure, Sarawak Report can suggest to curious constituents, concerned to know his whereabouts, that he is in Canada!

In the Facebook posting, which can be accessed by 1,591 facebook friends, Sulaiman acknowledges the waves of speculation about his state of health and possible demise, which have carried on since he dramatically dropped from public view well over a year ago. However, he airily dismisses such concerns.  In one entry dated February 15th he declares:

“Yes, I am healthy and still alive. (Stupid people listening to and spreading rumours. Please!! Get a life!!!)” 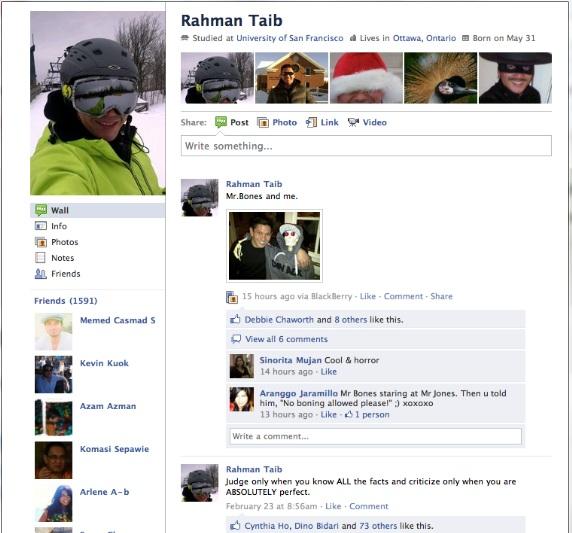 The 42 year old, who is the Federal MP for Kota Samarahan, a seat he inherited from his father the Chief Minister in 2006, clearly thinks that constituents who are wondering where he is should ‘get a life’!  In his Facebook entry he says he lives in Ottawa, Canada and makes no obvious mention of his political responsibilities back in Sarawak on the other side of the globe.  Instead, the entries focus on pictures of his jet-set lifestyle and leisure activities.  There are plenty snowy scenes, but little sign of sunny Sarawak!

Sulaiman has been also spotted in London in recent months, including dining in Soho in September with his sisters 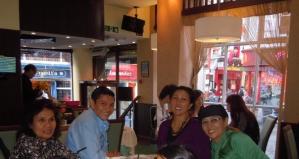 and Aunt.  Not long after he was photographed entering the Hyde Park apartment building used by his family in advance of a family get together that included Taib last October. So Sulaiman is definitely getting around the place. However, he has made not a single appearance in the Federal Parliament Building in KL for well over a year when he resigned his position as Deputy Tourism Minister.  Neither has he been seen in Kuching, even missing his father’s recent wedding.

Nevertheless, he retains his position and continues to be paid as Kota Samarahan’s MP!  In fact, all his constituency duties have long since been delegated to Idris Buang, a political secretary of his father and none of the people who elected him to help them with their problems have seen a whisker of him!  If Sulaiman was being paid to work in an office or a shop, his boss would legitimately be able to ask why if he is not at his desk.  His constituents have an equal right to ask the same thing without being told to “get a life”! 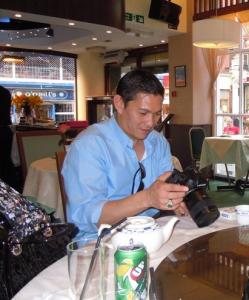 Photographs for his facebook but no news for the rest of us!

Plenty of complaints but no explanations!

In the absence of his use of any of the normal official means of communication, Sulaiman has chosen to rely on the informal channel of his selected Facebook friends to pass his comments to the outside world.  He has been using this means to post gossipy chat and photographs, as well as to complain that speculation about him is wrong.  However, few of these friends appear to have been passing on the messages to the bemused public, hence Sarawak Report’s decision to publish some of his remarks.

In particular Sulaiman has been condemning those in Kuching who have concluded he must be seriously ill to have so suddenly neglected his duties and he has used his “wall” to deliver them a number of little lectures on the subject of truthfulness!

These are some of the more recent excerpts from his recent Facebook posts.

“If the truth always prevails, then why are there so many people lying these days?”Rahman Taib

“Honesty has diminished a lot in the world. Sad, but true”.Rahman Taib

“Life is short. Be truthful, honest and kind in every way. These attributes will benefit your current and afterlife”.Rahman Taib

Time for an honest open statement from Rahman Taib and his Dad?

We therefore wonder why the son of the Chief Minister does not take a little of his own advice and present the truth of the situation publicly through the proper channels?  With all the media at his disposal he could do it with as little effort as posting such facile comments on his Facebook Wall?   So, what is the truth Sulaiman Taib?  You are by choice an elected public figure and therefore people have a right to know.

If on the other hand the absentee MP has decided to opt for a private life instead, then why not resign his public office and allow a by-election to take place in his neglected constituency?  His father could call it now and it would give a useful indicator of where the wind in blowing in the run up to the much delayed state election!

However, Sulaiman’s clear sense of unjust treatment indicates that maybe he has found himself unable to do any of these obvious things.  At the risk of being accused of more unfounded speculation Sarawak Report concludes that Sulaiman seems clearly in a predicament that he feels is not of his own making.  Could it be that he has displeased his draconian Papa and been banished out of sight?

As near as Rahman gets to an explanation of his absence!

In yet another posting that clearly refers to his bizarre circumstances, Sulaiman calls on the rest of us to withold our questions and our judgement until we know all the facts of the case!

Such a complaint begs the request that the person who can present these facts should therefore get on and do so! Tell us all the facts so we can make our judgement Sulaiman Taib.  It is your failure to do so that is being criticised at the moment and rightly so!

The truth? Let's hear it!

To think that this was the man whom the Taib was so recently preparing to ‘inherit’ his role as Chief Minister and to think that Taib has so recently declared that he still can find no one else in BN who is capable to succeed him!  the gathering at the Borneo Convention promises to be a pretty dull and desperate event – unless, of course, Sulaiman surprises everyone and turns up after all!