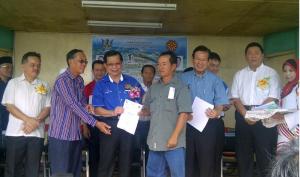 The stories are starting to pour in as the election gets underway.  Just this Sunday afternoon a key worker for PR, who is based in Kuching, was turfed out of the State when he returned after a short break in West Malaysia.

Money is being handed round the longhouses in grubby notes by senior BN Ministers, along with crates of beer.  Gerrymandering is being spotted on the part of the Election Commission and even the army has been caught brutally threatening villagers to vote BN!

Perhaps the most outrageous example is that of Deputy Chief Minister George Chan, who has been deceiving villagers that he has obtained the land titles they have waited for decades to get.  In fact he has just given them a conditional letter, pending approval of the titles – they have been told that the final decision will be made AFTER the election, so they had better vote BN!

What Cheats!  And what does it tell us?  It tells us that BN are terrified they will lose UNLESS they bully, bribe and abuse their position of trust and influence to force people to vote for them.  Well, maybe they will lose anyway. 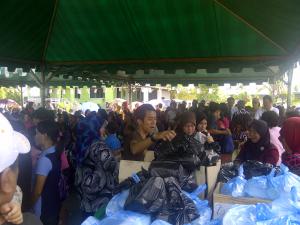 Food parcels for votes! How dare BN bribe people to hand over their freedom with their own money?

To help beat the cheats and expose them for what they are, we are publishing a 24/7, interactive election monitoring service here for you on Sarawak Report.  This is your chance to play your role in publicising and proving what is going on to and warn others not to fall into the traps set by BN.

So, get out your cameras and mobile phones and start recording and photographing what is going on.  Then paste it on our wall for all to see!

Already, amazing stories of the sneaky tricks they have been getting up to have been filtering through, like the spoof airline tickets being offered to Sarawakians in West Malaysia.  It’s only a trick so that they tell their IC details – then BN think they can vote in their name!

We have got it started, now it is up to you.  Click here  or elsewhere on the site to read the stories and take part in our ground-breaking BEAT THE CHEATS popular election monitoring campaign.