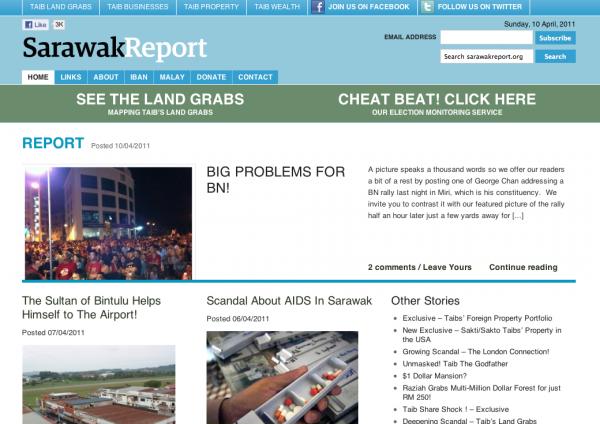 What they want to shut up!

As we all know, the guy who cheats is the guy who isn’t good enough. He is also lazy and morally lax. In the end – just not very impressive and definitely not a winner. The cheat, of course, always sits next to and tries to copy the person he admires most and whom he recognises to be better than he is.

The markers can see it all a mile off.

So now that BN has turned to cyber-cheating it is not hard for the voters, like the markers, to see what is going on!

BN’s cheating response to Sarawak Report and others

BN seem to have realised they had a problem with the growing spread of information about their activities towards the end of last year. Since the internet meant they were no longer able to control everything that went out in the media (their previous form of cheating was control of the press), they were beginning to face difficult and unanswerable questions about the extraordinary wealth of Sarawak CM Abdul Taib Mahmud.

At first they tried not answering the questions. But, as the gossip turned into a clamour, more had to be done. Prime Minister Najib Razak publicly warned the CM that if he could not “win the cyber-war” he would lose the election!
It still took Sarawak BN a considerable while to get their act together, but eventually they hired various people to do the job for them. By this time it was very late indeed. Around mid-March and just days before the election was announced they finally started churning out their responses to the handful of websites, who have been performing the function of throwing some light on the corruption that has made them so rich.

So, what was their approach to this battle that was already effectively lost through their own indolence and arrogance? How were they going to put the cork back in the bottle and suck back all the information that is now out there in everybody’s heads?

The one thing BN have stacks of is money, which is why it is their solution to everything. So they have duly been throwing it into the “cyber-war”. Their answer to Sarawak Report has been dozens of new sites, which have popped up under the control of PBB Youth Information leader, Abdul Aziz bin Tan Sri Adenan Satem.  Abdul Aziz is the son of Adenan Satem, Taib’s PBB Information Chief and he is Taib’s nephew (of course).

All these sites are just like the Borneo Post and are by definition as boring as hell with the finger-prints of BN propaganda over every line. But, Abdul Aziz’s biggest and proudest effort has been a site called Sarawak ReportS . As they say ‘imitation is the sincerest form of flattery’, so of course we all know that this means that young Abdul regards our site to be a massive success and he wants others to come to his site thinking they are visiting ours.

This attempt to ‘piggy-back’ our site is in fact a well-known tactic by cheat marketing outfits. Such people hope that a person, looking for say a washing machine, will google for a reputable site and end up by mistake purchasing from the dodgy replica site instead.

Unfortunately this hardly works with Sarawak ReportS, because instead of finding a similar product, the occasional reader who does stumble upon it is immediately confronted by obvious BN propaganda and lies – not at all what they signed up for. Yuk!
But, BN has continued to pour in money to this enterprise. Having failed to make inroads by the name cloning, they then started paying for advertising at the top of the Google search pages for Sarawak Report. They have to pay for every hit they get this way, but don’t bother.

In a crass attempt to disguise their involvement in the site they have hosted it through an outfit in the USA, run by a fellow called Todd Ash of Easy Internet Marketing in Scottsdale, Arizona (which is also the base of Sterling Pacific, the massive Samling and Taib related property company).

His own advertising tells you all you need to know about Todd Ash, who likes to call himself “Billionaire” and aggressively threatens any critics of his various get rich quick schemes, which range from using water as petrol to chain marketing ventures. http://toddash.com/

It appears that none of this activity has been successful for the BN cyber cheats. What a surprise! As our own Sarawak Report hits have gone stratospheric over the past month, their site has floundered with few hits and fewer comments (which they dare not even publish).

So now, in the last week of the state election campaign, they have progressed to all-out war with an even more expensive cheat option, which is to try and knock us out altogether! Over the past week Sarawak Report has suffered interference, hindering the site. Over past 24 hours this has escalated into a full cyber-attack.

This attack has been confirmed by our server company as a so-called “Distributed Denial of Service Attack”, where the aggressor hires robots to shoot bits of software at the server with the intention of bringing it down. This was also the method used to attack Wiki leaks.

Since all this kind of attack does is to stop a site for a few hours, while the victim moves elsewhere, it is really just the internet equivalent of a toddler’s tantrum. There, there BN, don’t cry. When you finally grow up and engage in proper democracy, you too will learn how to play on a fair playing field and match argument with argument, not with brute force and childish attack.
In a desperate bid to make hay while the sun shines the imposters have spent even more money sending out SMS messages telling people to log on to their own site!

Meanwhile, the team at Sarawak Report admits to having been entertained by all these antics by the BN cyber-warriors over the past few weeks. Own goal has been followed by own goal by their inept internet players.

We know that the issues facing Sarawak in this election are of utmost importance and will deeply affect the lives of future generations, but even in this most serious of moments it has been good to experience some laughter.