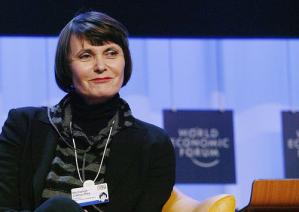 President of the Swiss Federation, Micheline Calmy-Rey, is to address the matter of freezing Taib's assets in Switzerland

In a fullsome letter to the Swiss-based NGO, the Bruno Manser Foundation, the President of the Swiss Federation Micheline Calmy-Rey has revealed that she has forwarded information about Taib Mahmud’s assets in Switzerland to the regulatory body FINMA (the Swiss Financial Market Supervisory Authority) for investigation.

Calmy-Rey (pictured left at the Davos World Economic Forum, which is hosted annually in Switzerland) is the country’s Head of State.

The letter, sent on April 8th, is revealingly entitled: “Freezing of possible assets of Abdul Taib Mahmud, head of government of the Malaysian state of Sarawak, in Switzerland”.

In the letter the Swiss President makes clear that the country’s authorities take extremely seriously the concerns that have been raised internationally about Taib’s profiteering from timber corruption and are unhappy that such assets may have been invested in Switzerland. 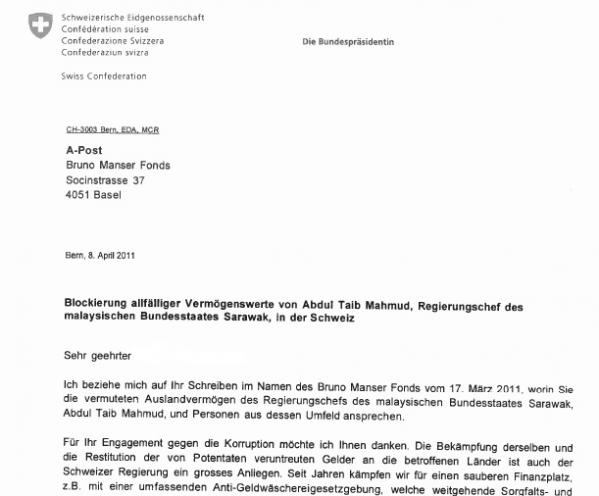 Letter from the President of the Swiss Federation entitled "Freezing of possible assets of Abdul Taib Mahmud, head of government of the Malaysian state of Sarawak, in Switzerland"

Praise for the Bruno Manser Foundation

The President begins by thanking the Bruno Foundation for its commitment to the fight against corruption.  The foundation was set up in memory of Bruno Manser, the Swiss environmental campaigner who mysteriously disappeared in Sarawak after years of campaigning against logging on behalf of the indigenous Penan tribespeople.  It has recently  spearheaded an international anti-timber corruption campaign, which saw demonstrations outside a number of  property assets linked to the Chief Minister across the globe, including London, Seattle, San Francisco, Tasmania, Sydney, Adelaide and Ottawa. 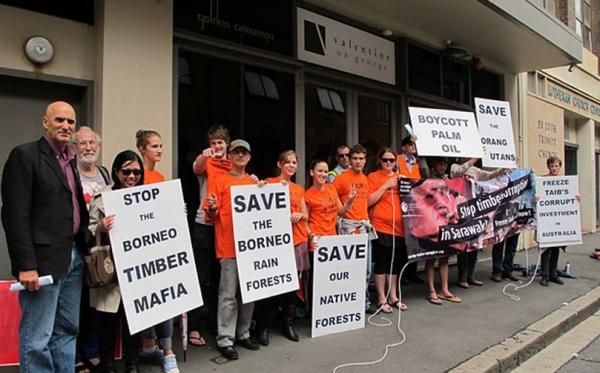 One of the protests - in Sydney

The Bruno Manser Foundation had also pointed out that Taib Mahmud is believed to have invested heavily in the Swiss Banking system and has a family member married to a Swiss national (Elia Geneid), who has profited from a contested alienation of Native Customary Rights Lands.  Taib is believed to have invested a great deal in the once secretive Swiss banks over past decades, although, following recent reforms, he has more recently focussed his attention on Monaco which remains famously lax on the matter of money-laundering. 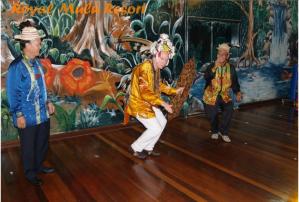 Prince Albert of Monaco 'goes native' in Mulu, while a guest of Taib last year.

Indeed, the Taib family has publicly fostered its relations with Prince Albert of Monaco over the past couple of years,  including heavily sponsoring the Prince’s own Foundation, which is meant to serve the interests of the environment!

Prince Albert enjoyed a luxury visit only last year to the Mulu Resort, which is owned largely by the Taib family, after the region was forcibly requisitioned from the native Berawan tribe.

The entire surrounding jungle has already been cut down, thanks to Taib, and is now faced with large-scale flooding, owing to his latest plans to dam most of the rivers of Sarawak.  This is all part of the so-called SCORE project, which promises to further hugely enrich Taib’s own family businesses.

As a result, the UN has already made clear that it is actively considering withdrawing the World Heritage status that was originally conferred on the Mulu site.  Concerns such as this, along with recent exposes about the Taib family landgrabs and wider corruption, has clearly been feeding in to the international perception of Abdul Taib Mahmud and his 30 year domination over Sarawak. 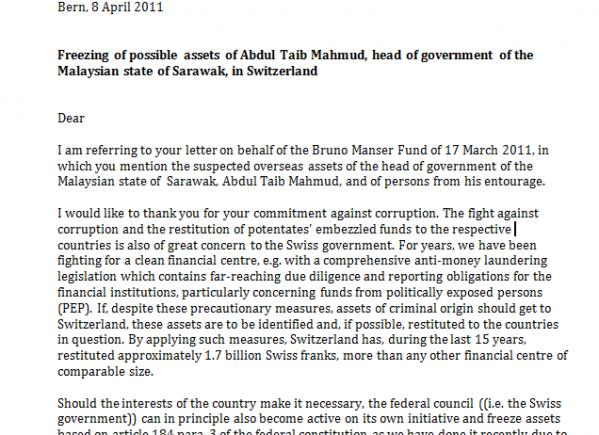 English translation of the letter from the President of the Swiss Federation to the Bruno Manser Foundation.

In the letter to the Bruno Manser Foundation the President of the Swiss Confederation states that she is referring to a letter mentioning:

“the suspected overseas assets of the head of government of the Malaysian state of  Sarawak, Abdul Taib Mahmud, and of persons from his entourage”.

The letter goes on to thank the foundation for its “comittment against corruption” and confirms the comittment of the Swiss state also to the “restitution of potentates’ embezzled funds to the respective countries”.  Calmy also points out that Switzerland has already restituted 1.7 billion Swiss Franks in such fashion (admittedly this sum only represents a small fraction of the suspected value of Abdul Taib Mahmud’s suspected personal wealth):

“The fight against corruption and the restitution of potentates’ embezzled funds to the respective countries is also of great concern to the Swiss government“, writes Calmy-Rey in the lengthy and personally signed letter. “For years, we have been fighting for a clean financial centre, e.g. with a comprehensive anti-money laundering legislation which contains far-reaching due diligence and reporting obligations for the financial institutions, particularly concerning funds from politically exposed persons (PEP). If, despite these precautionary measures, assets of criminal origin should get to Switzerland, these assets are to be identified and, if possible, restituted to the countries in question. By applying such measures, Switzerland has, during the last 15 years, restituted approximately 1.7 billion Swiss franks, more than any other financial centre of comparable size”.

In the letter the Swiss President makes clear that she has fully absorbed the issues raised by the anti-timber corruption campaign and that the matter is taken extremely seriously by this, one of the world’s top banking centres and a facility which has been used by Taib to manage his finances.  She confirms that she has formally passed on the matter to FINMA, the powerful Swiss authority charged with investigating money-laundering.

We can further report that FINMA has already contacted the Bruno Manser Foundation to acknowlege that it has been tasked with an investigation into Taib Mahmud’s assets and will be proceeding with that investigation. 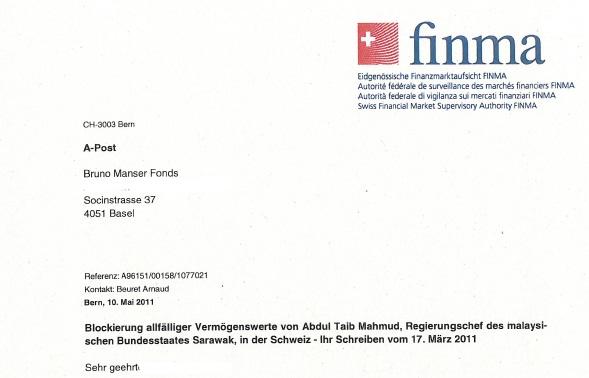 Key role of the Malaysian Government

Calmy-Rey in her letter also makes clear that under international money-laundering agreements the burden remains on the Malaysian Government to make a request to Switzerland to freeze potentially illegal assets. Otherwise, countries such as Switzerland might normally be constrained to wait until Taib has been ousted.

On the other hand the Swiss President specifically refers in her letter to the recent freezing of assets belonging to the potentates of Lybia, Egypt and Tunisia, which have been possible under existing provisions of Swiss legislation. 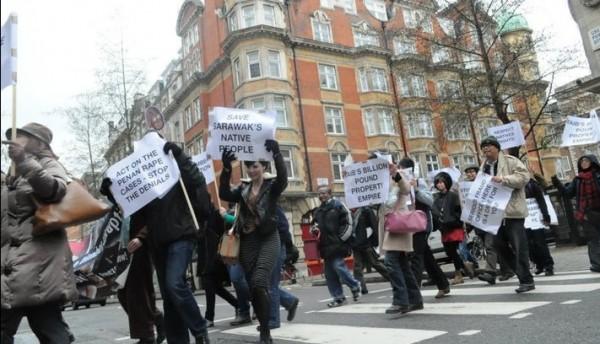 Demonstration against Taib in London earlier this year

The question is whether Najib Razak will be prepared to move against his key fundraiser?  Taib dominates BN as “the tail that wags the dog” in Malaysia, because of his ability to deliver key seats through his dictatorial control over Sarawak’s “rotten” rural seats.

If Najib fails to do act, in the face of an investigation and requests by the Swiss authorities, this alone will become a contentious issue.

Signed by the President of the Swiss Confederation