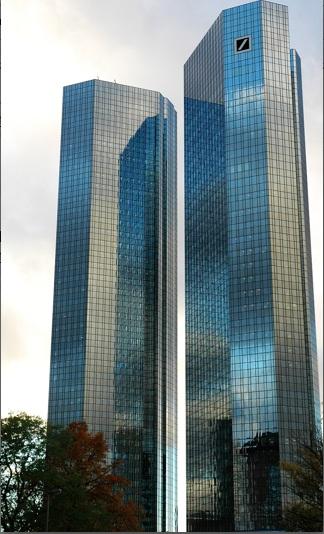 The launching of an official investigation into Taib Mahmud by the Malaysian Anti-Corruption Commission (MACC) has increased the pressure on the Chief Minister’s web of global investments.

Anti-money laundering campaigners are now demanding action from Germany to freeze Taib’s assets held by the country’s largest bank Deustche Bank.  This follows the Swiss Government’s announcement of its own investigation into the assets owned by the billionaire Chief Minister.

In a joint press release yesterday three European NGOs pointed to a mass of evidence showing extensive dealings between Taib-owned companies and Deutsche Bank worth hundreds of millions of ringgit and involving a number of off-shore operations.  The Chief Minister, meanwhile, has been unable to provide any legitimate explanations for the amassing of such wealth by himself and his immediate family.

Now, Sarawak Report can also provide new, exclusive evidence of Deutsche Bank’s further involvement in the management of the Taib family’s private property assets in the US, via the off-shore company SOGO Holdings Limited, based in the island of Jersey. 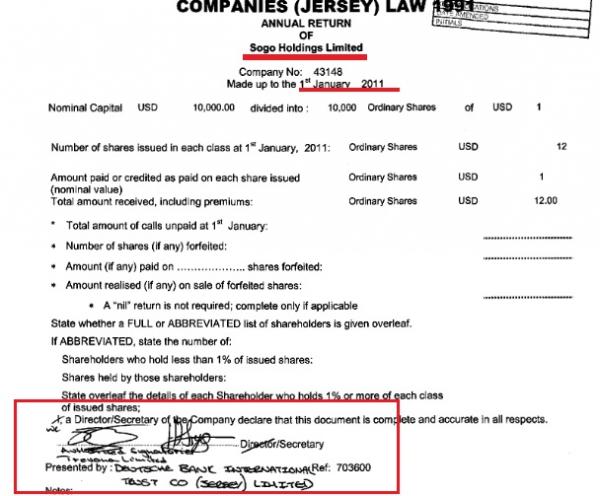 Our previous reports have detailed how Taib himself, along with his two sons, eldest daughter and two of his brothers were listed as the original Directors and Shareholders of Sakti International, a company which is currently managed by Taib’s son in law Sean Murray and which owns properties worth in the region of a hundred million dollars in the US. 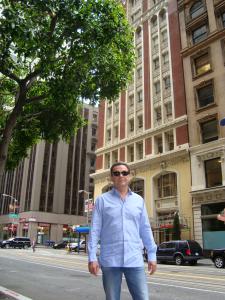 We can now demonstrate that these assets were in turn placed under the control of an offshore holding company, which is managed by Deustche Bank in Jersey.

Papers shown to Sarawak Report by the former Sakti manager, Ross Boyert, who died under tragic circumstances last year, revealed the structure behind the management of these assets.

In a letter to The Chief Minister, whom he address as the ultimate boss of Sakti International, Ross Boyert outlined information that Sean Murray had given him about the company during his initial interview for the post.

Sarawak Report also has access to a number of company documents that show that Sogo was originally managed in Hong Kong by the former asset management company BT Trustees Limited.  The company, which specialised in acting as a ‘trust representative for Asian clients’ moved to Jersey from Hong Kong after the handing over of sovereignty in 1997.  It was then taken over by Deutsche Bank International in 1998, along with the management of the Taib family trust in Jersey, SOGO Holdings Ltd.

These company documents confirm that Rahman Sulaiman Taib was the President of Sakti International and was in charge of transferring its ownership to SOGO Holdings.

Documents related to Rahman Taib's transfer of Sakti's assets to Sogo Holdings, which is now managed by Deutsch Bank for the Taibs in Jersey

Boyert even showed Sarawak Report a copy of a diagram drawn by Rahman Sulaiman Taib, the Chief Minister’s second son and the previous president of Sakti International, illustrating how he planned to move the ownership of Sakti to an off-shore trust company.  The diagram specifies the Banker’s Trust Company and places it in its original location, Hong Kong.  There are major tax benefits in moving such companies off-shore. 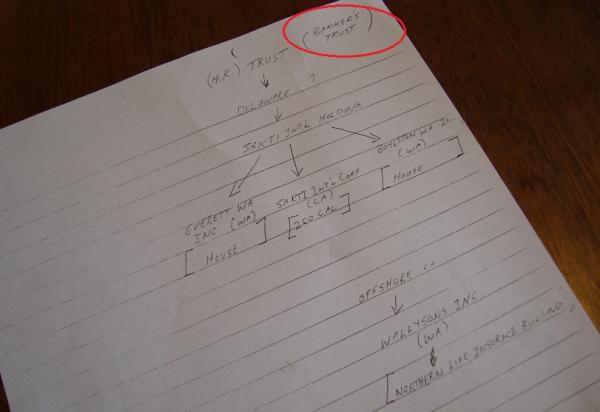 Rahman Taib's diagram showing how he planned to structure the family's US assets. The Trust company was SOGO Holdings Ltd

The above diagram drawn by Rahman Taib also shows his parallel plans for managing the so-called Northern Life or Abraham Lincoln Building owned by the Taibs in Seattle (see bottom right of diagram).  This building now houses the FBI’s main headquarters in North West America and is a top secret facility. 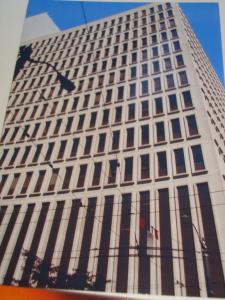 The diagram illustrates shows how the building was held by the Taibs under the company called Wallysons Inc, which again was in turn put under the ownership of an off-shore trust company.  Boyert alleged that the offshore company referred to was Rodinmass Inc, which is located in the British Virgin Islands.

The full allegations in his court case for unfair dismissal against the Taibs in 2007 are deposited with the CALIFORNIA SUPERIOR COURT.

In their submission to the German Chancellor this week the three NGOs, The Bruno Manser Foundation, the Society for Threatened Peoples and Rettet den Regenwald, a Hamburg-based rainforest advocacy group have also listed numerous other business connections between Deutsche Bank and the Taibs.

The investment group K & N Kenanga Holdings Bhd, of which by far the largest shareholders are Deutsche Bank Asia and the Taib family company CMS, has a share capital of RM 611 million and a further RM 2.4 billion in assets!  The related company Kenanga Deutsche Futures has RM 387 million in assets.

The NGOs also point out that the group of Kenanga companies are managed by Boards that include chief officers from CMS and Deutsche Bank.  CMS Finance Chief, Richard Curtis, and Taib’s son in law Syed Ahmad Alwee Alsree are both on the Board of K & N Kenanga Holdings,alongside Deutsche Bank’s Chief Country Officer of Malaysia Operations, Raymond Yeoh Cheng Seong.

Indeed, Yeoh’s Business Week profile notes that he has no less than 37 [business] relationships with Syed Ahmad and 25 relationships with Richard Curtis, so great are the ties between the two companies!  The NGO’s are now querying why, given international money-laundering legislation, Deutsche Bank has developed such extensive ties with a family of such questionable wealth?

“We are seriously concerned that, as a leading German financial institute, Deutsche Bank is closely cooperating with the highly corrupt and internationally discredited Taib regime. We feel that this cooperation cannot be in the interest of the German government, which is globally promoting the effective combating of corruption.”, they stated in their letter to the German Chancellor, Angela Merkle. 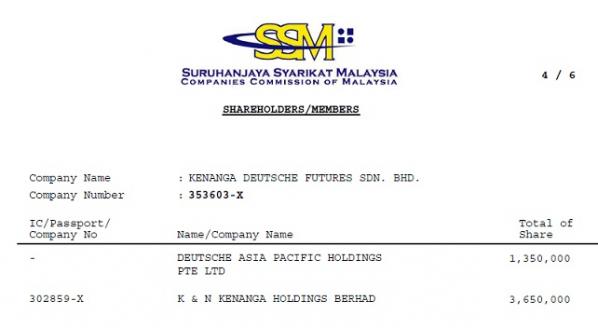 Joint enterprises. The NGO complaint also points out that "In 2005, Deutsche Bank was the sole bookrunner for the US$ 600 million listing of Sarawak International Incorporated in Labuan, Malaysia's offshore financial centre. Before December 2004, Deutsche Bank arranged a US$ 135 million loan for the Sarawak Economic Development Corporation (SEDC), a state body controlled by Taib Mahmud".

Taib has announced that he will finally make a public statement about the MACC corruption investigation into his affairs.  To satisfy his critics he will have to explain convincingly how it is that he, his immediate and his extended family could have achieved world class wealth off the back of his modest salary as Chief Minister by legitimate means.

The glaring examples of abuse of power, cronyism and timber corruption in Sarawak will make that extremely hard for him to do and have also placed his supposedly respectable business partners, like Deutsch Bank, in an equally difficult position.