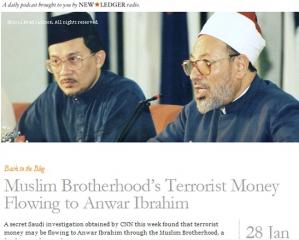 Opposition leader Anwar Ibrahim is being targeted by the same malicious on-line bloggers who have sought to defame former UK Prime Minister Gordon Brown and former US Ambassador John Malott.

Research by Sarawak Report has identified clear evidence that the same team of paid writers have been working on a sustained campaign of deliberate vilification of Anwar, in an attempt to destroy his image in the United States and to give the impression in Malaysia that he is heavily criticised in America.

This dirty tricks campaign began shortly after Tsunami election result in 2008 that nearly swept Anwar and the PR coalition into office and it is clearly financed by BN.

The US-based blog New Ledger was launched in 2009 as the main vehicle for these commissioned attacks and throughout 2010 and 2011 this supposedly American website has focused more on Anwar Ibrahim than on any other subject!

Sarawak Report, therefore, challenges UMNO/BN to deny our inside information that its party leadership are paying New Ledger and a web of associated on-line attack blogs to defame its main political opponent.

The shrill, malicious and one-sided articles produced by New Ledger’s team of American writers can, on the one hand, be dismissed as laughably ridiculous.  Rachel Motte, Christopher Badeaux, Leon Wolf and Brad Jackson are people with no profile in the United States or recognised expertise on Malaysia, however they vie almost daily to produce ever more vicious and obscene attacks. 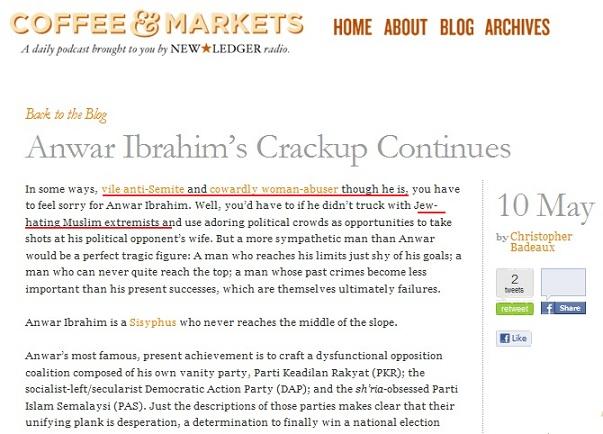 On the other hand, the clear and deliberate agenda to create fear and hatred against Malaysia’s opposition leader, by exploiting  prejudice and ignorance in the United States, is chillingly malign.  New Ledger, which targets a right-wing Republican readership, continuously portrays Anwar as a “Jew-hating Muslim extremist” and constantly makes reference to un-proven sex allegations as if they were true.

The allegation that this team of paid name callers has worked hardest at repeating, however, is that Anwar is a dangerous Islamic terrorist.  They describe him as a “strategic threat” to the United States, should the “moderate” BN lose the next election and be replaced by this ‘enemy of the West’.  Readers of New Ledger could be forgiven for concluding that Anwar could become the next Osama bin Ladin!

These self-proclaimed experts repeat the same justifications to back these claims. One is that Anwar is a founder of the International institute of Islamic Thought (IIIT), based in Virginia. Attempts to brand any Muslim organisation as terrorist-linked can easily gain support in the States post-9/11, however this claim bears little scrutiny.

A genuine American expert in Malaysia affairs, former Ambassador John Malott, has commented on this particular allegation and thoroughly dismisses it:

For this reason Malott explains there is no official or expert credence given in the United States to the sort of ‘analysis’ that the New Ledger writers come up with.  “This is just a very narrow group of right-wing websites and I do not think they are having any impact on the body politic”, he told Sarawak Report. 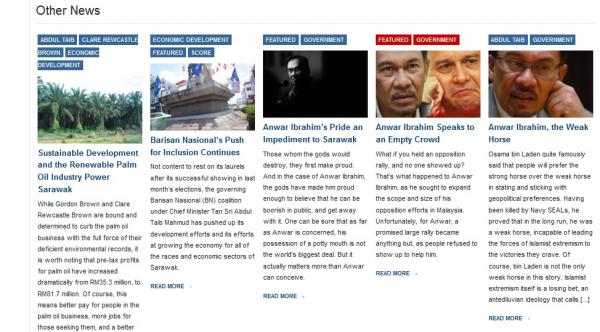 Another website linked to New Ledger is Sarawak Report(s). It is equally obsessed with Anwar!

Malott also confirms that very few Americans are aware of or interested in matters to do with Malaysian politics and he is therefore sceptical as to why such a dominating proportion of the New Ledger website is devoted to this subject.  The website, after all, claims to be appealing to right wing Americans.  Their mission is: 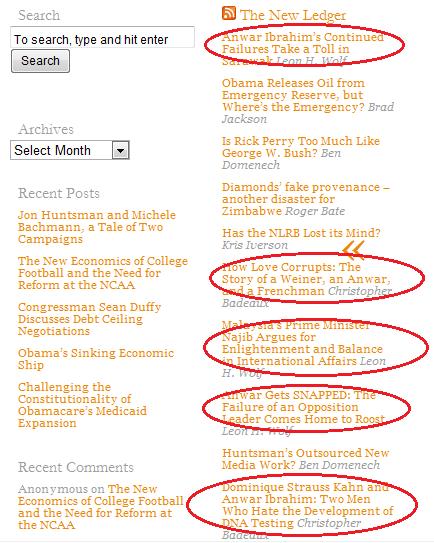 Current line up of top stories served up by New Ledger for its conservative American readers - as always half are about Anwar and Malaysia!

In fact, few Americans would place endless articles about Anwar Ibrahim on a list of information they want or need, or indeed their Sarawak articles about Clare Rewcastle Brown.

The real target audience is, of course, the BN politicians who have expensively commissioned the articles and people who might be influenced back in Malaysia.  BN leaders are anxious and jealous about Anwar ibrahim’s close contacts with Western opinion formers and his reputation as a liberal and a democrat, who was brutally jailed on false charges by his political enemies.

It is clear that BN politicians would like to see this image destroyed in America and in Malaysia and have engaged the writers of New Ledger to carry out the task.  Ambassador Malott, who continues to observe Malaysian affairs and who has himself been vilified by the same writers, commented to Sarawak Report:

“Why have these people, who are unknown and not experts on Malaysia, suddenly become so interested in one issue?  They are not writing about any other countries, only Malaysia.  It seems obvious to me that they are being paid” [Ambassador John Malott].

To accept secret payments for articles that pose as genuine news and comment is the hallmark of a disreputable website and discovery of such a fact would be fatal to a journalistic career for any of these writers in any respectable organisation in the United States.  Malott concludes that it has been a “highly ineffective campaign” and another example of money wasted by the Malaysian Government on PR.  “For several million dollars, is Rachel Motte and Christopher Badeaux the best you can get?” was his comment to Sarawak Report. 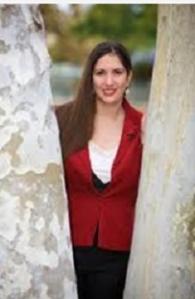 Rachel Motte - pleased to have found 'fame' in Malaysia!

Our research has established that the online PR campaign against Anwar has adopted exactly the same strategy as the campaign against Sarawak Report, commissioned by Taib.  That game plan is to ‘bounce back’ the articles that have been placed in the United States websites into anonymously run blogs in Malaysia and then work on getting the stories into Malaysia’s mainstream media, as if they had originated from a reputable source.

In this way they are conniving to mislead the Malaysian public and trick them into thinking that Anwar is also despised in America and has lost his influence in the US establishment.

Malaysia Watcher is one of the key websites that is managed by the New Ledger team and which colludes in this practice.  New Ledger writers like to refer to Malaysia Watcher as an ‘independent website’, which they use as a resource, but in fact the sites ‘bounce’ stories off each other to build them up.

Far from being independent or objective Malaysia Watcher sets out its agenda as “keeping a close eye on Anwar Ibrahim” in its google search profile!   Favourite contributors are Motte, Badeaux and Wolf and all the articles are hysterically one-sided attacks on Anwar.

The sort of disinformation and defamation practised by this dirty tricks team can be shown in just one example of a recent New Ledger/Malaysia Watcher story.  On January 28th of this year their writer Brad Jackson claimed that CNN had discovered from secret Saudi files that Anwar Ibrahim might be receiving money from terrorists.

In fact the actual news story from CNN, which had been broadcast and placed online the day before, on 27th January (below), said the exact opposite.  It said that the secret Saudi intelligence showed there was NO evidence that Anwar had received any money. Significantly, Brad Jackson was trying to back up an earlier accusation that had been made against Anwar by New Ledger’s own pay master, the BN leader Najib Razak. 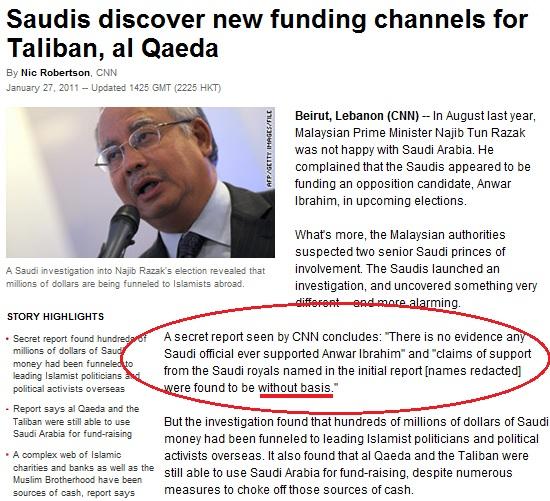 Jackson lied - the CNN report said the exact opposite. It confirmed that the secret papers showed there was 'no basis' to Najib's accusations that Anwar had received Saudi money

Journalists who write such deliberate distortions of the plain truth purely to please their paymasters can expect to hold no credibility in the United States.  However, this damaging lie was designed to be carefully disseminated as black propaganda.

Like poison pen writers these dirty tricksters attempt to hide their actions.  In an earlier article we detailed how New Ledger’s Rachel Motte unprofessionally libelled Ambassador John Malott.  When we tracked him down he told Sarawak Report he had immediately sent her “a strongly worded email”.  In it he informed Motte that by calling him “Anwar’s lackey” she had  insulted his integrity and he would consider legal action.  Motte, he reports, removed the article from New Ledger within 10 minutes.

However, the article was nevertheless posted up on the allied site Malaysia Watchers and remains there unchanged.  Sarawak Report challenges New Ledger to deny any connection with this site, which has republished some 20 articles from New Ledger over the past few months.  Malaysia Watcher is registered under the same domain by proxy company as the Taib ‘Sarawak Report(s)’ site, which is also linked to New Ledger and also carries articles about Anwar created by the same group of writers. 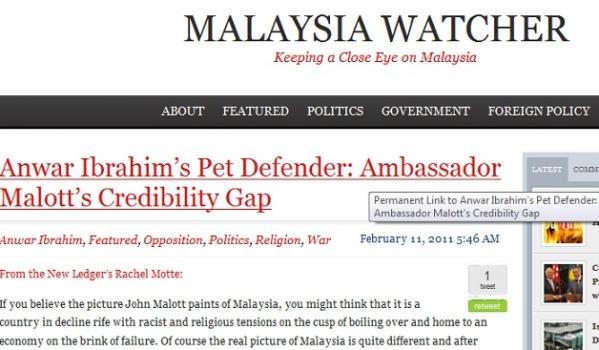 Removed from New Ledger under threat of legal action, but Motte has kept the story up on the team's Malaysia website

We suggest that Rachel Motte continues to insult the Ambassador’s integrity via an unattributed website, which she and her fellow writers like to refer to their American readers as a reliable source. 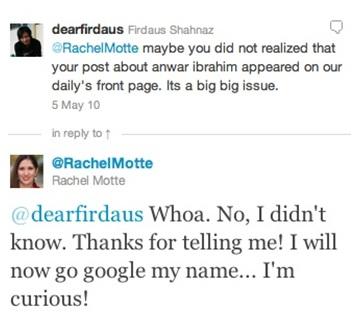 What twits! - Rachel gossips on Twitter with a journalist pal from Bernama at the successful placement of one of her stories on Malaysia's official news agency !

The other accusation that New Ledger writers make repeatedly against Anwar is that he is an anti-Semite/hater of Jews.  This is a prejudice that is particularly obnoxious in the eyes of most Americans and so the insult is designed to turn opinion against Anwar in the States.

Repeatedly New Ledger writers cite as proof of Anwar’s bigotry his recent criticisms of BN’s large payments to APCO the US lobbyists and PR company with offices based in Israel.  Sarawak Report has evidence of clear links between the managers of New Ledger and APCO, an interest they do not declare in making these comments.

Meanwhile, the same writers seek to imply that Najib and BN are to the contrary friendly and uncritical of Jewish people and of Israel and would not use pejorative terms against them.  This is despite the fact that Malaysia is the one country in the world that forbids its citizens to travel to Israel and BN politicians repeatedly refer to Jewish people as”Zionist”.

Indeed, in Malaysia itself BN continuously criticize Anwar for the exact opposite of anti-semitism – they accuse him of being pro-Israel and anti-Muslim!  For example, Deputy Prime Minister Muhyiddin Yassin publicly attacked Anwar for being pro-Jewish saying:

Likewise, when Israel took action against the relief ship for Palestinians entering its waters last year, Prime Minister Najib Razak made his own terminology towards Israel clear.

BN politicians are suspicious of Anwar’s known friendships with American liberals, a number of whom are Jewish.  Yet, while they condemn Anwar as a weak Muslim and pro-Israeli back home in Malaysia, they allow their paid writers in America to portray him as anti-Jewish and as a Muslim extremist on right-wing websites.

The aim of such cynicism is to create the impression that Anwar is a terrorist threat to American interests, while the BN government (which has become increasingly dependent on the support of extreme Muslim groups) is a moderate ally against such terrorism.

The paid writers in this pernicious project should declare their financial interests in the propaganda they put out.