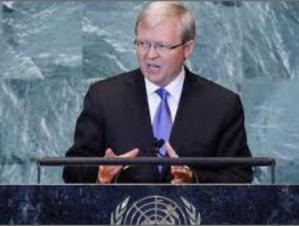 Kevin Rudd, Australia’s former Premier and current Foreign Minister has issued a prompt and positive response to our request for an investigation into the Taib family’s foreign assets in that country.

In a letter received yesterday, just one day after Sarawak Report publicised the request, Australia’s Foreign Minister confirmed that the matter of Taib’s wealth has been referred to the Australian Attorney General’s Department for consideration.

This follows similar commitments to investigate by the Swiss and German governments.  Malaysia’s own Anti-Corruption Commission has also confirmed that it has launched an official investigation into the Chief Minister’s conduct.

Taib has exerted a total control over Malaysia’s richest state in terms of natural resources for the past 30 years, occupying all main offices of state and treating all permits and licences as his own personal gift.  The Swiss-based NGO, the Bruno Manser Foundation, has requested world governments to now examine his extensive foreign assets as part of their StopTimber Corruption Campaign.

The letter in full

Kevin Rudd’s letter thanks the Bruno Manser Foundation’s Director for bringing the matter to the attention of the Australian Government and, crucially, reassures him that:

Dr Straumann responded today that he is heartened by the response and looks forward to hearing further from the Australian authorities about the extensive assets held by various members of the Taib family across the country. 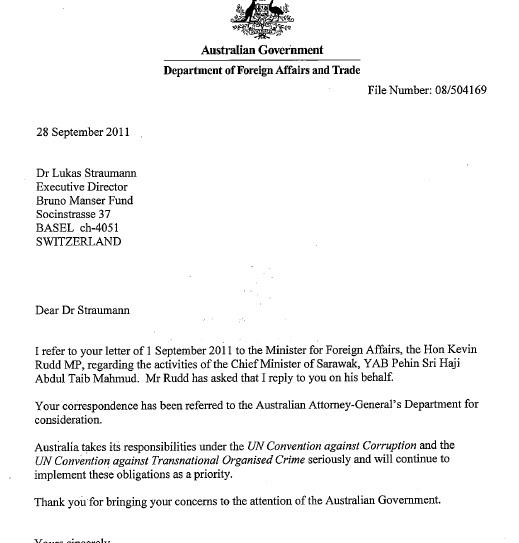 The letter from Kevin Rudd’s office in full

However, the issue has sparked a row in Hobart over the past days, where one of the Taib family’s major assets are located.  Two major timber processing mills are owned by Ta Ann Tasmania, a subsidiary of Ta Ann Sdn Bhd.  The Executive Chairman and major shareholder of Ta Ann is Hamed Sepawi, Taib’s cousin and highly favoured business associate.

Supporters of Ta Ann from the Australian timber lobby have complained that the company has been unfairly accused of causing evironmental degradation in Sarawak and claim that Ta Ann has had no role in exploiting native lands or destroying rain forest.  They also say that the company, which is one of Sarawak’s top five timber and plantation companies, has had no role in logging the remaining natural forests of Tasmania. 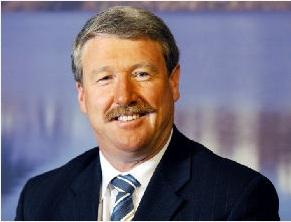 Bryan Green - not in Sarawak but in Shin Yang!

Yesterday, Bryan Green MP, Tasmania’s Deputy Premier, ignited the issue in the local Parliament by claiming that notices advertising talks by the Editor of Sarawak Report in Hobart and Launceton, implied untruthfully that Ta Ann has been logging in native areas of Sarawak.

However, the Deputy Premier demonstrated a certain lack of local knowledge and understanding of the issues in Sarawak when he proclaimed that the picture showing a Penan tribesman and a timber truck had nothing to do with Sarawak, but rather some place he called Shin Yang!  The picture he complained:

“said effectively that this was in Sarawak, when we know full well that the photo was taken in Shin Yang and had absolutely nothing to do with Ta Ann.  It is vitally important that if people are going to turn up to this public forum that they understand it has been based on a false premise in the first place”. 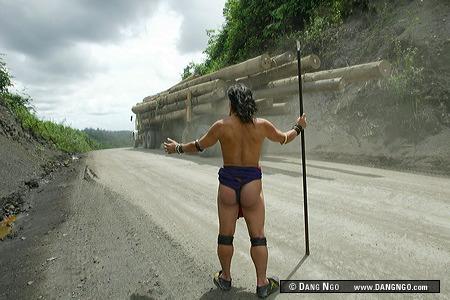 The picture Green objected to, which was used to promote a talk on Sarawak. the MP said this was taken in a place called Shin Yang!

Sarawak Report can confirm that this picture was taken in Sarawak and that Shin Yang is a logging company and not a place.  Both Ta Ann and Shin Yang are two of the major logging and plantation companies that have stripped billions of ringgit of timber out of Sarawak’s state lands and native lands.

Recently Hamid Sepawi, the boss of Ta Ann, announced there was very little forest area left in Sarawak that has not been logged at least once.  A reason that possibly explains his own company’s interest in exploiting the remaining jungle of Tasmania.

Ta Ann itself escalated the row by issuing a press release today demanding “Truth in Advertising” and attacking the poster saying:

In response Senator Bob Brown, the leader of Australia’s Green Party and also a representative of Tasmania, told reporters that the picture was of Sarawak and was a generic representation of the problems of logging.

The information about extensive corruption in Sarawak and Hamid Sepawi’s close relationship to Taib Mahmud was a matter of considerable concern to Australians, he added.  He stated this morning that he wanted to “put the company on notice” that its activities in Australia are now “under surveillance”.