The UK media regulator, Ofcom, has now announced that it too will launch an investigation into the activities of FBC Media and its association with the Malaysian Government, Sarawak and other regimes with public profile problems.

The announcement comes at the same time as confirmation by the British Foreign Office that it has launched a money laundering investigation into Taib’s assets in the UK.

Ofcom not only has responsibility for BBC World, which has already just published its own report into the scandal, it also supervises the American owned stations CNBC and CNN’s activities in Europe, which are both deeply embroiled in questions surrounding FBC’s global news fixing scandal (see our previous coverage).

The UK’s Independent Newspaper has now taken a leading role in investigating the issue, which represents a level of corruption in the broadcast media on a parallel with the scandal surrounding phone hacking by certain print media.   Today they reported on the revelations about the US economist Jeffrey Sachs. 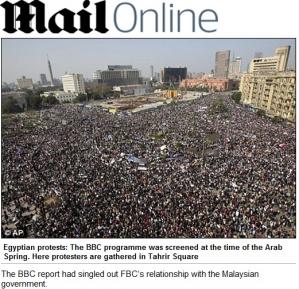 The Independent has also revealed that FBC was making BBC programmes praising President Mubarak during the height of the ‘Arab Spring’ rebellion against him in Egypt.  The same programme took the opportunity to attack Malaysia’s PKR opposition leader Anwar Ibrahim as a supposed Muslim ‘extremist’ backing the popular revolt against the Egyptian dictator.

Both Mubarak and Najib have now of course been exposed as secret clients of FBC. Meanwhile, the deposed Mubarak’s vast assets of millions of dollars stolen from his people have now been frozen in bank accounts throughout the world.  The story was also taken up today by the UK’s biggest circulation newspaper the Daily Mail and also by the Guardian newspaper. 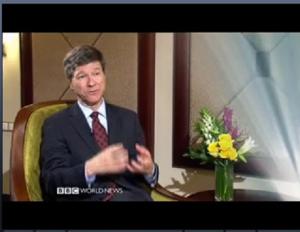 In the United States the well regarded blog Politico has also taken up the matter, in what is likely to be just the start of wider coverage as questions are raised about the links between several US news stations and publications with FBC Media.

Yet, in a statement to Politico and in a letter to us a spokesperson for the US economist Jeffrey Sachs complained about ‘inaccuracies’ in Sarawak Report’s coverage of the matter.  Sarawak Report has asked for clarification on these ‘inaccuracies’, beyond the comment that taking his family on a paid for trip to Malaysia could not be described as a holiday:

“The visit to Sime Darby was not a family vacation in any way. During his trip to Sabah and Sarawak, Prof. Sachs saw considerable evidence of deforestation and environmental degradation and he raised those concerns with the company and Government, in order to help advance more sustainable agriculture in these fragile and crucial regions”[Erin Trowbridge, spokesman for Prof Sachs]

Sarawak Report would like an explanation for the contrast between this statement and Prof Sach’s remarks when interviewed by FBC media earlier this year for the BBC:

“The way that Malaysia, for example, developed palm oil with smallholders who were working in larger areas and often with government leadership…has been exemplary.”[Prof Sachs speaking on FBC-made Third Eye programme for BBC World in July]

Meanwhile, the UK has also joined the list of countries that has announced that it too will be examining the assets of Taib Mahmud in the light of concerns about the money laundering of the proceeds of political  corruption.

The move comes as three banks were last week fined in Switzerland for having helped conceal illegal assets by potentates who were deposed during the Arab spring, including FBC client Hosni Mubarak.

Reflecting a new spirit of tackling the problem of corrupt world leaders using Western banks and property portfolios to hide money stolen from their people, the UK Foreign Minister with responsibility for Malaysia, Jeremy Browne, signed a personal letter in response to a request from the Bruno Manser Foundation and Sarawak Report.

He confirmed that Taib’s UK assets will now be investigated, especially in the light of the MACC’s own investigation into the BN Chief Minister and also new agreements on cooperation on law and order between Britain and Malaysia:. 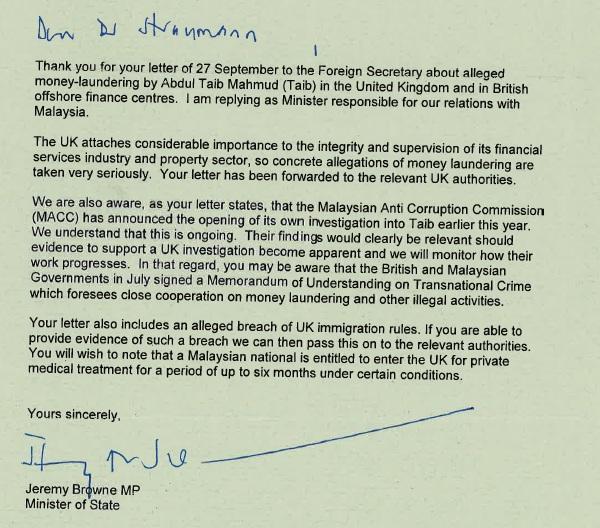 Sarawak Report will be reporting further on the UK’s investigation into Taib’s assets.  Britain joins Germany, Switzerland and Canada in indicating they will examine properties and investments held by the Chief Minister in their countries.

Taib has paid millions for PR.  However, money cannot buy reputation for long.