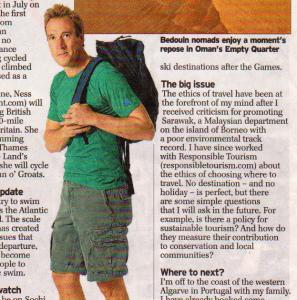 Back off to the jungle? Cover boy Fogle poses in his gear, but claims there will be no more films from Sarawak

The TV ‘adventurer’ Ben Fogle has gone public to express his regret at having taken on a highly paid role for the Sarawak Government as their tourism ambassador.

He now acknowledges, along with the rest of the world, that Taib Mahmud has turned this part of the Borneo Jungle into an environmental disaster zone, where the natives are struggling to survive and the animals and plants have been largely wiped out.

We wrote an open letter to Ben in early March, when he started producing films about the Sarawak jungle. One of these began by calling it “the future of conservation”:

“This is one of the most beautiful rainforest regions on the planet… This is the future of conservation here in Sarawak… looking after this pristine environment and the riches this country has.”

We pointed out to Ben that if Sarawak under Taib represents the future of conservation then there is little hope for our planet.

He did not respond to our open letter, even though he has acknowledged he read it.

Nevertheless, his army of ‘mummy blogger’ fans started to notice that there was another side of the story and to question among themselves why Ben was persisting in hosting a champagne promotion in London for his movies?

Why didn’t Fogle tell us? they started asking, as news of Sarawak’s problems circulated round twitter

Some started to pull out and the event was cancelled the day before.

Then the Independent newspaper penned a major expose on Ben’s involvement in Sarawak, forcing him finally into making a response about his decision to promote Sarawak as some sort of eco-paradise. 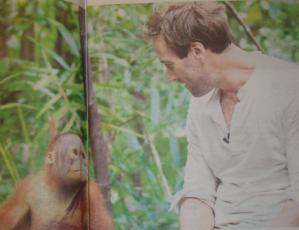 They remind me of my children Fogle told delighted mummy bloggers

Fogle admitted he might have made a mistake in taking up the job and it seems the Global Witness movie (out just a few days before) provided his much needed excuse.

The eco-expert expressed himself shocked and surprised to learn for the ‘first time’ that there were problems with the management of Sarawak’s forests!

He has now offered to give money to a charity of Global Witness’s choice to make up for his unfortunate Sarawak promotion.

Since he has not deigned to contact Sarawak Report he has not asked us which charities we would suggest.

However, we insist that local campaign groups like Save Rivers (who are combatting Taib’s mad dam campaigns) should come before the wealthy giant WWF, which has never had the guts to challenge Taib about his destruction of the jungle in their so-called Heart of Borneo initiative [suggestions from readers are invited into our popular comments section].

And it seems that Fogle has further changed his tune. At first he had advertised a principle that he didn’t take notice of “political” issues when deciding whether to visit a country.  He opined”

“I make a distinction between the Sarawak Tourism Board and Taib Mahmud [Sarawak Chief Minister]. I was in Sarawak to promote tourism” [Independent Newspaper]

Of course, if Fogle had done his original research or taken our article seriously he would have known there is no such distinction, because Taib runs everything in Sarawak to make money for himself.

This is why the photographer provided by the Tourism Board for Fogle’s shoot was the daughter of Baram MP Jacob Sagan (now sacked from the nominations list) who has made millions from belian licences herself.

But now Fogle has announced he has revised his principle of remaining aloof from the realities of the countries he is visiting. He told the Telegraph newspaper this weekend that he has taken a course in “responsible tourism” and will now question whether his paid adventures are taking him to “ethical” places where “sustainable tourism” is practiced.

We say, well done Ben and it never hurts to say thank you. 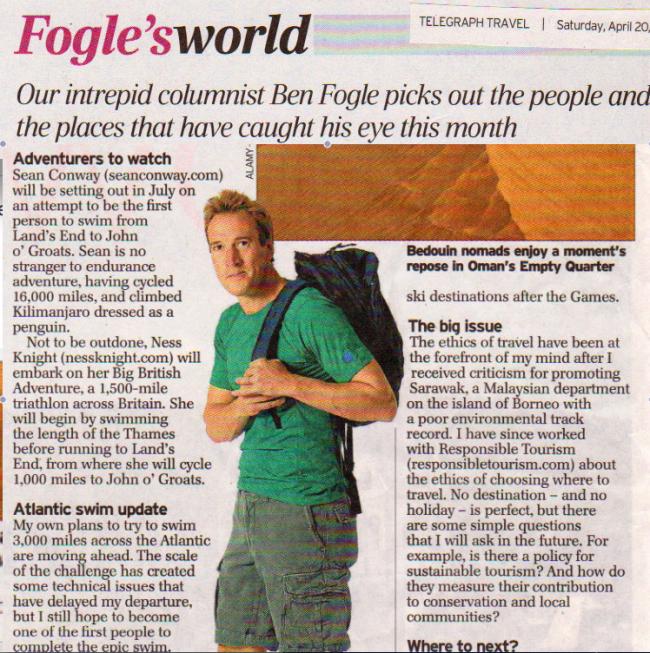 New look – Fogle is now into ‘ethical’ and ‘sustainable tourism’, according to his latest foray into the Telegraph newspaper