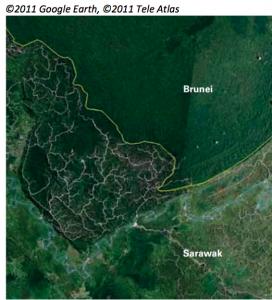 The UK-based NGO Global Witness has responded to Taib Mahmud’s bizarre offer to debate with them about the corruption and land grabbing under his regime in Sarawak.

And their answer is “yes”.

During an election period this will most likely leave opposition leaders like PKR’s Baru Bian and DAP’s Chong Chieng Jen somewhat amazed.

Both have been striving to engage the elusive Chief Minister to an open debate, only to be turned down.

Now it seems Sarawak’s political leader would prefer to debate with foreign NGO’s on TV than with the opposition!

Of course, few believe that the Chief Minister, who prefers easy questions, will really carry out his promised offer of any such open debate. 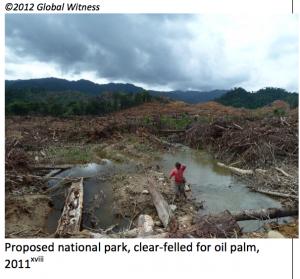 Therefore Global Witness, which is an anti-corruption and pro-environment NGO that receives funding from a wide range of bodies (including the British Government and the Open Society Institute), has sent Taib an open letter today outlining the basis of its accusations about the corruption of his government and his devastation of Sarawak’s environment.

According to the NGO, just one satellite image shows up the lie behind the Chief Minister’s claims that over 70% of Sarawak’s forests remain “preserved” and “as luxuriant as ever”.

The photo shows the difference between Brunei’s well kept forests and the battered and destroyed areas just across the border, which have been logged several times and are in most cases sadly “beyond recovery”.

Also to illustrate Taib’s lies, the NGO produces another picture of one of the regions that the Chief Minister has been trumpeting as a “proposed national park”. The area has already been stripped and destroyed, despite being promoted as an area earmarked for preservation (above).

“Google Earth satellite images clearly show that the vast majority of the remaining natural forest has been heavily degraded by multiple rounds of selective logging and is criss­‐crossed by a spider’s web of logging roads. Environmental Impact Assessments of such areas describe them as being “beyond recovery”. Satellite images show that only 5 per cent of Sarawak’s forests remain in a pristine state (unaffected by logging or plantations).” [Open letter from Global Witness to Taib Mahmud]

The shocking extent of Taib’s greed and depravity and his treatment of Sarawak’s forests is summed up in one further conclusion by the NGO, which is that the evidence shows that the deforestation rate in Sarawak is the worst in the entire world. 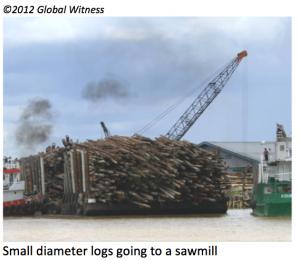 No big logs left in the forest….

Global Witness has made a number of conditions as the basis for its taking part in an interview with Taib.

The first being safe passage for its personnel, given Taib’s notorious reputation for banning people from the country, detaining or even locking them up, merely for criticising his actions.

But, Global Witness also demands some further conditions.  First they want full disclosure from the Chief Minister about what Directorships and Shareholdings he and his family own in companies in Sarawak which have received licences or contracts from the state. This includes companies held in the name of nominees.

The charity asks to be informed about “the circumstances by which the Ministry of Resource Planning & Environment arrived at the decision to direct Sarawak Forest Department and/or Sarawak Land & Surveys to issue the said licences and land titles”.

Since Taib is also the Minister of Resource Planning & Environment and that the abuse of power in Sarawak has been blatant, he will be unable to release such information without revealing his own corruption.

The NGO also demands information on all Taib’s offshore assets and any dealings his companies have had with the lawyer Alvin Chong, who admits he is a specialist in tax evasion and the use of nominees to hide the real owners of companies in Sarawak (Sarawak Report has detailed numerous connections between Chong and the Taib group of family companies).

Chong had offered to illegally sell tracts of Sarawak’s territory on behalf of Taib’s cousins to foreign buyers through the use of nominees during  a filmed expose by Global Witness. 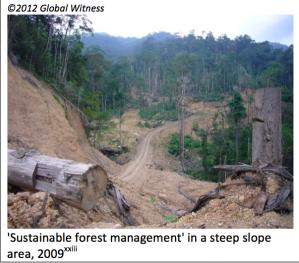 Recipe for erosion – logging in steep areas without due care

Finally, the NGO provides a table where it contrasts the Chief Minister’s grand claims about his management of the environment and the truthful reality of the situation in Sarawak.

The first claim is about protected forests. Global Witness says that Sarawak officials claim that 1 million hectares of Sarawak’s forest is ‘totally protected’, with no logging allowed. They also have claimed that the State is the ‘biggest contributor’ to the ‘Heart of Borneo’ tri-­national conservation project led by WWF.

The reality is that only 0.5 million hectares is actually protected and only 1⁄4 of Sarawak’s part of the ‘Heart of Borneo’ is in a pristine state; another 1⁄4 is licensed for clear‐felling. More virgin forest was degraded in Sarawak’s Heart of Borneo during 2005-­‐2010 than in Indonesian Borneo, Sabah and Brunei combined.

The second false claim is about sustainable forestry management. Taib claims that Sarawak practices ‘sustainable forest management': felling only small numbers of larger trees in a low­‐impact manner and then leaving the forest to recover for 25 years. 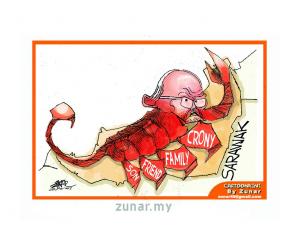 Cartoonist Zunar sums up the popular concept of Taib as the scorpion who has sucked out the life-blood of Sarawak for over 30 years.

The reality is that Environmental Impact Assessments demonstrate that Sarawak’s forests are regularly re-‐logged after much less than 25 years.

And the third claim is about international support from the UN linked ITTO.  Taib claims that the International Tropical Timber Organisation (ITTO) has ‘certified’ Sarawak’s forest management policy & practices and described these as ‘one of the best in the world’, says Global Witness.

Taib also claims that the ITTO’s mission to Sarawak in 1990 “agreed generally speaking with what we were doing before that” and that Sarawak is following ITTO advice by restricting logging to 9.2 million cubic metres/year.

 The reality says the NGO is that the ITTO has never ‘certified’ Sarawak’s forest management policy or practices. The ITTO mission in 1990 found that Sarawak’s forests were being logged at double the sustainable rate and ‘in a manner which is damaging to the environment’.

Global Witness’s open letter to Taib can be accessed here.

Sarawak Report fully expects it to remain unanswered by the Chief Minister, who has had to face increasing in-fighting in his state coalition during the run up to an election, where half his key candidates have been exposed for blatant timber corruption and abuse of office.