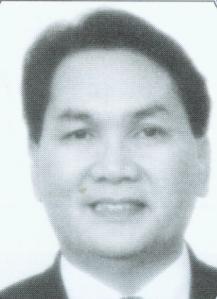 The nominee behind the nominee – Taib’s brother Onn Mahmud

The name of the company is Natalite Investment Limited and it is based in Hong Kong.

We can now reveal, after extensive investigations into the papers of Ross Boyert, the former manager of Taib’s US property company Sakti International, how Natalite Investment Ltd links the Chief Minister to the Japanese timber kickback scandal, which he has consistently denied.

Natalite Investment Ltd is one of a web of companies originally ‘owned’ by one Shea Kin Kwok, who came to fame in 2007 as the ‘owner’ of Regent Star, the company that was receiving millions in kickbacks from Japanese shipping companies in Sarawak.

It was suspected at the time that Shea Kin Kwok had links to Onn Mahmud, Taib’s brother, to whom the Chief Minister gave full control over issuing timber export licences.

Sarawak Report has been able to reveal that he was indeed Onn’s  paid secretary in Hong Kong.

Insiders have detailed to Sarawak Report how shipping companies wishing to export timber from Sarawak would have to pay huge sums into a number of Hong Kong companies, of which Regent Star was only one, in order to be issued with a licence.  This was the foundation of a large chunk of Taib’s fortunes 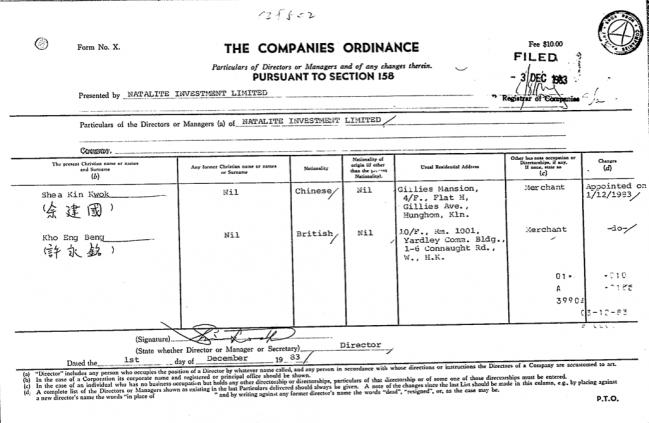 Although the Japanese tax authorities published information about these kickbacks and attempted to reclaim money from the shipping companies that paid them, Taib has continued to strenuously deny in all quarters that he was involved in any way with Regent Star.

He has even sued a number of people for suggesting he was.

But, thanks to Natalite Investment Limited, the Chief Minister can no longer deny his links to Shea Kin Kwok and his web of companies based in Hong Kong.

This is because in a tax return by the Taib family company Sakti International, as recently as 2006, the shareholders of Sakti International (Jamilah Taib, Rahman Taib, Mahmud Taib, Arip Taib and Mahmud Taib) all gave the US authorities Natalite Investment Limited, Hong Kong as their contact address. 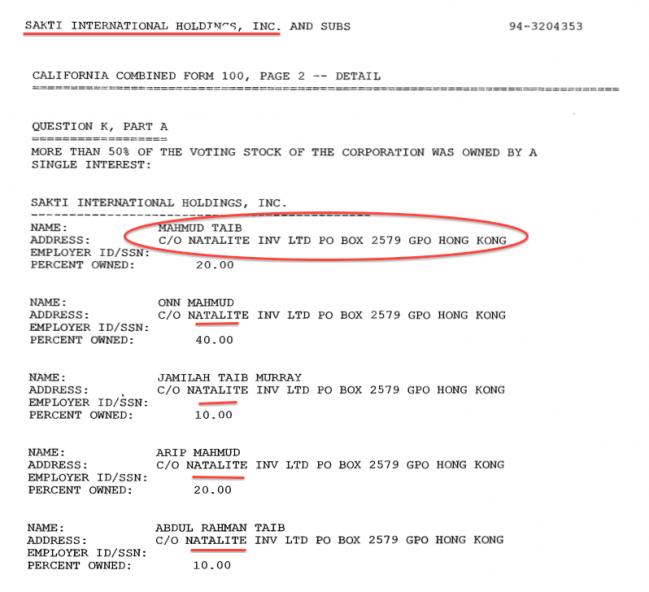 All the Sakti International shareholders put Natalite Investments Hong Kong down as their international address.

This was tantamount to admitting that they and not Onn Mahmud’s office clerk are the owners of Natalite, as with all the other companies he acted as nominee for. 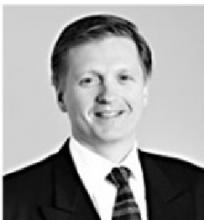 Notably both Herolite Investment and Grand Shine (HK) have a chunk of shares in Achi jaya, which is Onn’s enormous company that owned Achipeligo the company made responsible by Taib for issuing timber export permits.

Using Hong Kong’s public company records we have produced a representation of that web of Hong Kong companies linked to the Taibs, see below. 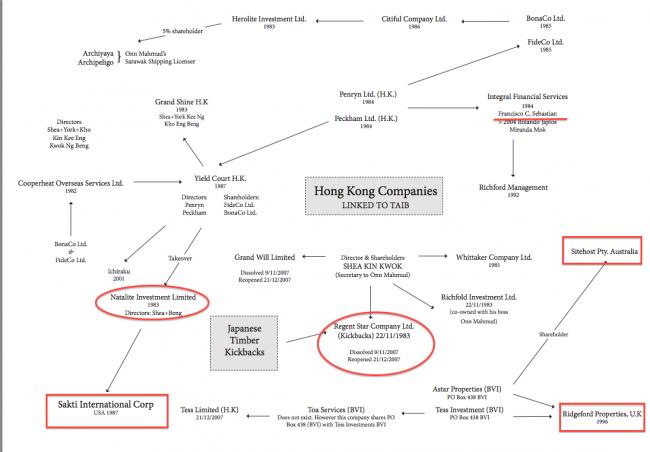 The direct connection to Taib

The connection of Natalite Investment Ltd to Sakti International Inc is of further special significance.  Because, thanks again to Ross Boyert’s papers, we are able to prove that Taib Mahmud was indeed using his family members as his nominees to conceal his own control over this US property company. 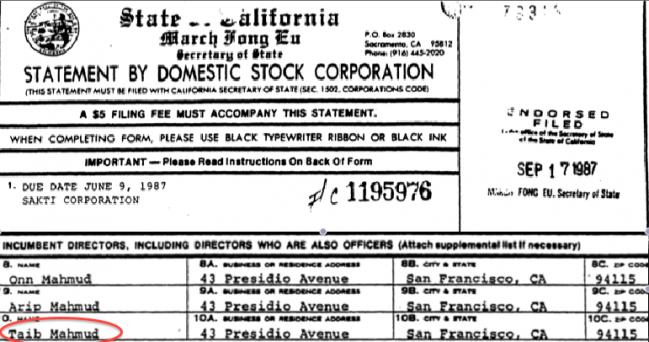 Taib was an original Director of Sakti Corporation, later declared as being linked to Natalite…

Firstly, Taib himself was one of the original named Directors of Sakti International, when it was incorporated back in 1987.

Secondly, private legal documents obtained by Ross Boyert show that the Chief Minister had drawn up a secret agreement with all the shareholders of this family company (his three children and two brothers) stating that 50% of the company was in fact covertly held ‘in trust ‘ for him personally. 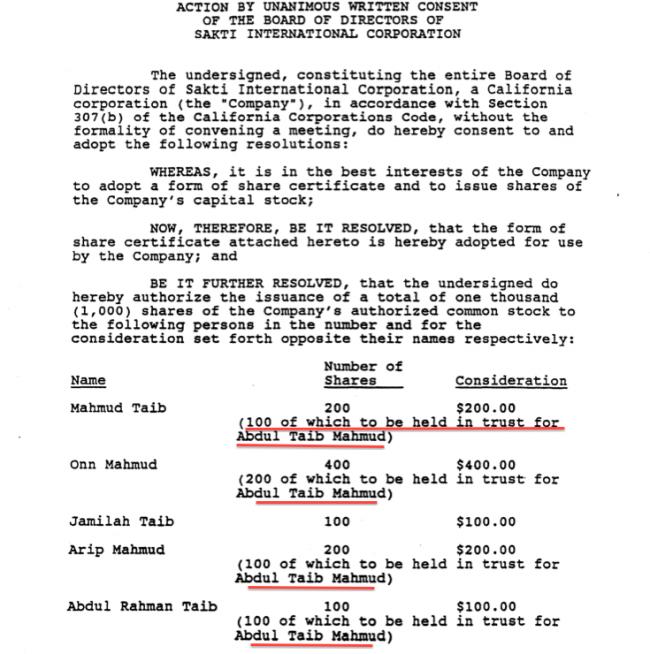 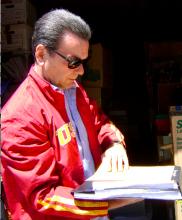 Ross Boyert looking through his papers on the Taib family

However, he always maintained to Sarawak Report that there was never any doubt as to who was in charge of Sakti International and indeed all the Taib family companies.

That person was the ‘Godfather’ Taib Mahmud.

Our evidence now directly connects Taib, as the major shareholder of Sakti International, with the Hong Kong company Natalite Investment Ltd, officially owned by Shea Kin Kwok, the man who was caught up as the recipient of millions of dollars of timber kickbacks from Japanese timber exporters from Sarawak.

We contend that Shea was a nominee for his boss Onn Mahmud and that Onn Mahmud and the other family members of Sakti and their related companies were in turn the nominees for the spider at the centre of this web of Sarawak funded companies, Taib Mahmud himself. 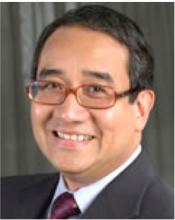 The network of Hong Kong companies first started up under the control of Onn Mahmud, Taib’s brother who managed his business affairs in the early days.

However, after a process of complex ‘takeovers’ another name began to creep in after 1984 as the ultimate ‘owner’ of these Taib connected interests.

This is the Philippino banker called Francisco C Sebastian, who in the early 1980s was a mere ‘wealth management advisor’ for another Hong Kong institution, but who in 1984 made the crucial move to start up his own wealth management business called Integrated Financial Services.

“Started out as an Investment Analyst. Became the Head of the Investment Management Division which handles both personal and institutional international investment funds….. Investment assets of personal portfolios included bonds in US dollars and other major currencies and Hong Kong, Japan and other major Asian stocks….. From 1984 established, owned and managed this Hong Kong company [Integrated Financial Services] that offers financial consultancy and corporate services to clients who wish to set up operations in Hong Kong or conduct business internationally.”[From Francisco C Sebastian’s online CV]

Sebastian has now moved to a top banking position as Head of the Philippines First Metro Bank, which he describes as “the only publicly listed bank in the country”.

It appears that on the path to such glory he has acted as a key investment manager for the Taib family’s ill-gotten wealth, acting as their nominee shareholder in the process. 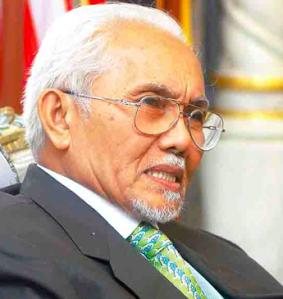 There are other identifiable links between the Hong Kong group of Shea Kin Kwok companies.

Records show that after the Japanese tax authorities asked questions about timber kickbacks in 2007 two of the key companies concerned were liquidated.

However, both companies strangely re-opened again under different named directors of course on 21st December 2007.

On the same day on 21st December 2007 another company opened in Hong Kong, called Tess Limited. Tess LImited has the same name as the original funder of the Taib family’s Ridgeford Properties in the UK.

Interestingly, although TOA Services Ltd is not registered in BVI, it declares the same PO Box address, PO Box No 438 as the company called TESS Investments in Tortola BVI, which finances Ridgeford Properties.

Ridgeford is ‘owned’ by Taib Mahmud’s daughter Jamilah and managed (once again) by her Canadian husband Sean Murray.

The same BVI Post Box No 438 address is also home to another company Astar Properties.  Astar Properties also has a share in Sitehost Pty, which is the Australian company owned by the Taib family in Adelaide.  Sitehost Pty owns the Adelaide Hilton Hotel and the big Victoria shopping centre in which the hotel is situated.

Astar Properties also was the original owner of Ridgeford Properties itself in London, which has hundreds of millions of pounds worth of valuable real estate on its books.

As a public figure who refuses to resign office after 50 years in government, is it not time that Taib was a little more open about all this wealth that he seems to have accumulated in the time being?