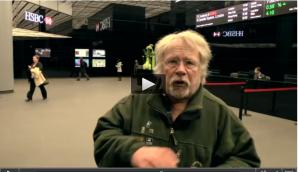 Bill Oddie’s spoof video classes bankers as a particularly nasty animal, very close to humans, but who can’t understand the damaging consequences of their greedy decisions to lend to people like Taib.

One of Britain’s most popular TV personalities, the bird expert Bill Oddie, has released a video condemning the disastrous logging of the Borneo Jungle in Sarawak and Sabah.

In the video he singles out the international banking system for supporting individuals like Taib Mahmud and Musa Aman, who have been the prime forces in driving through the destruction of the jungle over the past decades.

HSBC is specifically targeted as a major supporter of many of the most destructive companies and projects in Sarawak, including Shin Yang, Sarawak Oil Palm and Ta Ann, which are all closely associated with Taib Mahmud.

“HSBC has been lending money to companies which have been wreaking havoc in the forests of Borneo, illegally destroying habitats and causing human rights abuses” [Bankwatch Video, Bill Oddie]

In 2005 the bank advertised its eco-credentials by sponsoring Taib’s greenwashing ‘Media and Environment Conference’ in Kuching and placing orang utans on its poster campaigns.

Yet at the same time HSBC was the bank that was managing the multi-million dollar Singapore timber kickback accounts run on behalf of Musa Aman by his nominee, Michael Chia.

The true picture is forcing its way out 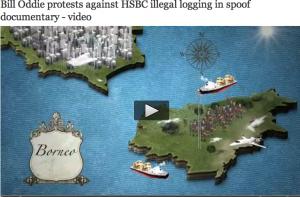 The destruction of Borneo – the world’s fastest rate of deforestation must stop.

Oddie’s protest is a refreshing contrast to the greenwash and spin put out by hired PR outfits, who have been paid to disguise Taib and Musa’s profiteering from the rainforest and their rampant destruction.

Another TV personality, Ben Fogle, was recently forced to apologise for having presented Sarawak as a conservation friendly state after we pointed out to him that this was nonsense.

Prince William and Kate were likewise turned into Musa Aman’s top PR weapons when they too visited Sabah last year, as part of a tour aimed at promoting British companies like the arms manufacturer BAE Systems (which is seeking to sell armoured ships and bio-fuel equipment to the state).

Both Chief Ministers have been making a torrent of ridiculous claims about their excellent eco-credentials and insisting there has been little deforestation in East Malaysia.

Bill Oddie, who is a genuine and respected environment expert on the other hand had this to say to the Independent Newspaper who also featured his video:

“Last autumn, I visited the Sabah area of Borneo …..Having experienced unspoilt forest and encountered Pygmy elephants, Proboscis monkeys, Orang-utans and several canoes full of appreciative tourists, I suddenly found myself face-to-face with a green wall of spikey fronged oil palms. Of course, I had heard of how destructive oil palm plantations are before – haven’t we all – but few things really register till you see them up close…..Despite what the palm oil lobbyists will tell you, oil palm plantations virtually wipe out the biodiversity found in rainforests. Just 20 species of birds are found in oil palm plantations, whilst other rainforests support over 200.”

Oddie, who is a well-known bird lover, also speaks about the desecration of Sarawak by Taib Mahmud’s system of ‘money politics’.  He points out:

“Deforestation is not only threatening not only the lives of those in Malaysia but also the very survival of every man, beast or banker on the planet.  In fact, he may not know it yet, but the banker is in fact the most self-destructive creature that has ever lived and he may well sow the seeds of his own extinction”

Oddie is referring, of course, to the disastrous environmental consequences for the whole planet of destroying the three remaining great jungles, of which Borneo is one. 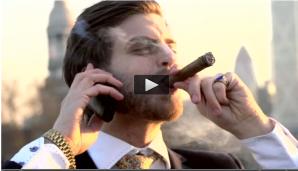 Taib maintains one answer to such vitally important protests, which is that a thousand years ago many northern forests were already destroyed, so why shouldn’t he destroy Sarawak’s jungle now?

It is like saying Hitler killed several million, so why shouldn’t I kill everyone else?

Oddie’s film is funny, so watch it.

Sadly, however the message is very far from funny in the wake of another rigged election in Sarawak that has allowed Taib Mahmud to continue his demented destruction.

Next week’s International Hydropower Conference is also set to go ahead in Kuching, in the face of widespread and informed protests.

After this film none of its delegates will be able to pretend that they are unaware of what their host is up to or the consequences of the SCORE project to wreck Sarawak’s remaining forests and rivers with more dams.