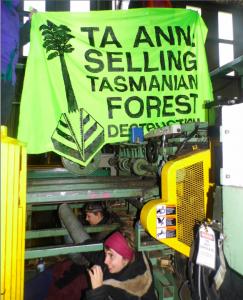 Concerns have been mounting over the millions of dollars being paid out by the Australian government to the company Ta Ann, owned by the fabulously wealthy cousin and business proxy of the Chief Minister, Hamed Sepawi.

The amount paid out so far in incentives first to locate in Tasmania; then to surrender previously agreed logging rights and now to build a new mill (announced last week) total AUS$44.6million.

It is money Ta Ann could easily have raised itself, since Sepawi is one of Malaysia’s wealthiest individuals and protestors say the payments are condoning corruption and human rights abuses in Sarawak, while also rewarding highly incompetent and deeply questionable decisions made by the Tasmanian officials and politicians who welcomed the timber company into the state back in 2006.

It will not come as any surprise to those familiar with the low profitability of Sarawak logging companies (when it comes to paying tax at least) that, despite the handouts, Ta Ann Tasmania has consistently recorded substantial losses.

It means that the company has not been liable for much tax and the 80 jobs Ta Ann provides could evidently have been financed far more cheaply, without impacting Tasmania’s disappearing forests.  Ta Ann even owes over a million dollars to the state in unpaid electricity bills. 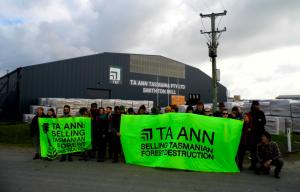 Protests are dividing the green movement with some groups willing to buy off Ta Ann.

Nevertheless, the issue has ruptured the green movement, with some NGOs showing willing to turn a blind eye to the problems in Sarawak and the further destruction of Tasmania in order to achieve a settlement with the state’s powerful logging lobby.

The Prime Minister, Kevin Rudd, came to the state last week to hand out $100million to these logging interests in return for their acceptance of the Forest Agreement, which will preserve some of the forest lands.

Such moves have infuriated campaigners, who are refusing to condone what they see as an unethical compromise with a corruptly connected company, all to support an outdated industry they say provides less than 2% of the jobs in the state.

Members of the Australian Students Environment network chained themselves to machinery at a Ta Ann saw mill last week and expressed solidarity with the people of Sarawak against the Taib family’s multi-billion dollar global logging enterprises:

“Today we are standing in solidarity with people of Sarawak. Every time we protest here in Tasmania against Ta Ann, we put a spotlight on their unacceptable practices in Sarawak, and we send a message of support to the people of Sarawak who are struggling under the regime of Chief Minister Taib and his timber cronies, including Ta Ann,” [Miranda Gibson, spokeswoman]

Their actions resulted in arrests and angry criticism not just from pro-logging interests, but also spokesmen from such organisations as the Wilderness Society, who are fearful of threats by loggers that they will pull out of the agreement if such protests continue.

“Should the movement separate Ta Ann’s Sarawak issues from the Tasmanian ones and develop a strategy accordingly? Is evicting Ta Ann from Tasmania the best strategy for tackling the parent company’s abuses in Sarawak? How will collapse of the Tasmanian forest peace deal help people and the environment in Sarawak? How will passage of the Proposed Reserve Order harm the people and environment of Sarawak? There is a concern that Ta Ann’s Tasmanian products could be used to ‘green-wash’ the company’s Sarawak products. This language actually suggests that Ta Ann’s Tasmanian products might be OK, or at least fixable. Does that mean that, even if Ta Ann Tasmania used 100% plantations, we would still want to kick them out purely because of their Sarawak record?” [Geoff Law, Australian forest campaigner]

In short are Australians are willing to accept yet more destructive investment of the Taib family’s dirty money, stolen from the people of Sarawak, for no discernible tax benefit just to placate the logging lobby ?

At the centre of the dispute are the questionable commitments entered into by the then Director of Forestry Tasmania when Ta Ann negotiated its heavily subsidised investment in Tasmania back in 2006. 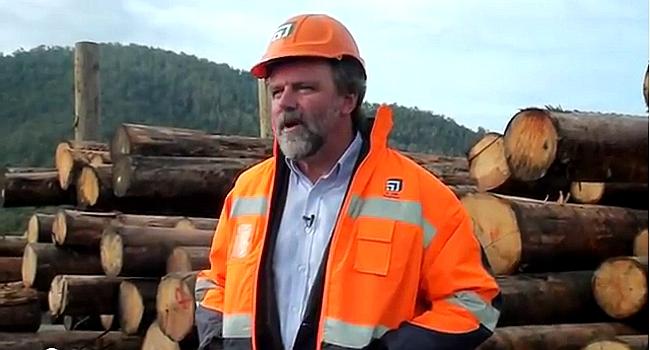 Revolving door – Rolley has now gone to manage the very company Ta Ann, which is receiving millions in compensation because of Forestry Tasmania’s inability to now fulfil the commitments he entered into on its behalf.

‘Captain’ Evan Rolley, as he was dubbed by Hamed Sepawi at the time was thanked for working night and day and doing all he could to broker the deal, which saw two mills built in the constituencies of two leading pro-logging MPs, then Premier Paul Lennon and Bryan Green (currently Minister of Energy).

“Mr Sepawi .. singled out for praise Foresty Tasmania head Evan Rolley, whom he dubbed Captain Evan Rolley for the way he drove his staff to efficiency. “No matter the hour of the night, there was not a time that we could not contact him,” Mr Sepawi said. “Thank you, to make us feel so welcome.” He said that Foresty Tasmania staff had done “a lot of work and forgone a lot of weekends” to clinch the deal”.[Tasmanian Examiner 17th Jan 2006]

Publicly, Ta Ann implied it would use plantation and “new growth’ wood.  But, it has turned out that Rolley includes the clear felling of wild native forests in this definition and had committed huge areas to be cut down to feed into Ta Ann’s mills.

Thanks to the contract Ta Ann became the single biggest driver of deforestation in the state.

The company has subsequently been exposed for marketing this product as “eco-wood” to customers in Japan and there are further concerns that its processing plant in Australia has also given the company the opportunity to market notoriously unsustainable Sarawak hard wood as ‘eco’ plywood as well.

Yet, despite the millions of dollars of Australian subsidies, company accounts show that Ta Ann claims to have lost $26.8million on its Tasmanian operation. It is hardly a record that appears to justify Kevin Rudd’s latest move, handing the company just over $7million to open a new mill in order to placate loggers who say they feel threatened by the move to protect the future of Tasmania’s forests.

And what of Evan Rolley? Shortly after concluding the deal with Ta Ann back in 2006 he ‘retired’ as head of Forestry Tasmania.  Yet within months he took up a $356,838 a year job working for Paul Lennon as the Secretary for his department.

Then it was back to the logging industry, working as the current Chief Executive for Ta Ann.