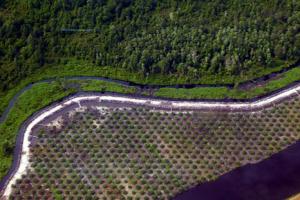 Over and again Chief Minister Taib Mahmud pulls arbitrary figures from his imagination to deny his destruction of Sarawak.  Flunkeys line up to agree with him.

For example, not so long ago the dotty old dictator pronounced that 70% of Sarawak remains untouched virgin jungle and that most of the rest of the state is covered in re-planted secondary forest!

The Borneo Post (owned by the logging company KTS and Taib’s own brother, Assemblyman Ali Mahmud) faithfully reported this unsubstantiated waffle, calling it ‘evidence’ that criticisms of the Taib family’s plunder of the Borneo rainforest are untrue.

But, of course every inhabitant of Sarawak knows that their leader is lying outrageously, because simply the trees have gone (unless you count dusty oil palm, which of course BN leaders do frequently attempt to describe as ‘jungle’).

Sarawak Report therefore re-prints (below) information on some proper, science-based research by responsible experts, in order to provide a counter-balance to the products of the Chief Minister’s self-interested imagination. 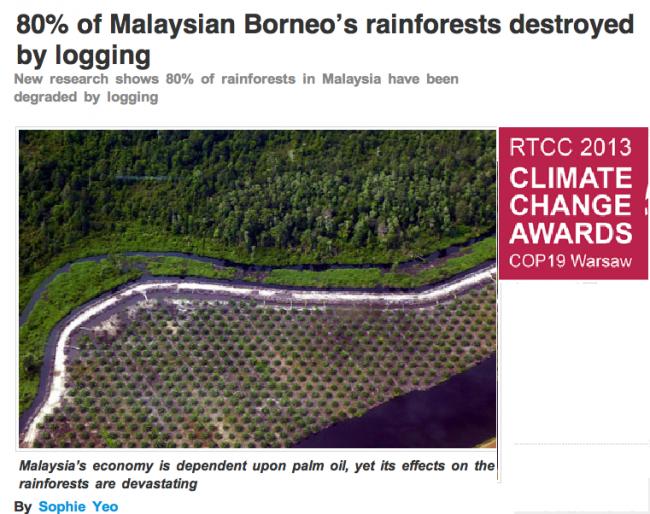 Borneo’s rainforests are under more threat than previously thought, researchers say, destroying a valuable carbon sink in the Malaysian part of the island.

“Malaysia’s forests are under threat from rapid deforestation, illegal removal of forest products and encroachment. Its deforestation rate is accelerating faster than in any other tropical country, and between 1990 and 2010, it lost 8.6%, or 1,920,000ha of its forest cover” [see film]

A research team made up of scientists from three universities used new satellite technology to survey the rainforest. They found that 80% of the tropical landscape had been degraded by logging, largely due to timber or oil palm production.

The high quality images produced by the CLASlite satellite system, developed by Greg Asner and his team at the Carnegie Institution for Science, revealed a large network of logging roads that had been built through the rainforests in the Malaysian states of Sabah and Sarawak, which together make up 26% of the island of Borneo.

Philip Shearman, who co-authored the study, told RTCC, “We found that there are very few areas of rainforest in the Malaysian states of Sabah and Sarawak that haven’t already been logged or cleared – we estimate that only about 22% of the land area of Malaysian Borneo is still covered by forests that have not been logged, and that’s being conservative.

“The sheer extent of logging, that logging roads penetrate almost the entire area of remaining forests in Sabah and Sarawak may be a surprise to many – that’s because most previous studies have used low resolution imagery to map forests, and you simply can’t ‘see’ logging unless you use high resolution imagery like we did.”

As well as unsustainable logging practices, Malaysia’s forests are under threat from rapid deforestation, illegal removal of forest products and encroachment. Its deforestation rate is accelerating faster than in any other tropical country, and between 1990 and 2010, it lost 8.6%, or 1,920,000ha of its forest cover.

This can lead to complete clearances of certain areas, leaving it dry and susceptible to fire, which also releases a large amount of carbon dioxide and other greenhouse gases into the atmosphere. The slash and burn tactics of the palm oil companies in Sumatra, Indonesia, were responsible for the fires in Indonesia which last month triggered one of the country’s highest recorded pollution levels thanks to the haze of carbon dioxide it released into the air.

The roads snaking through the forest identified by the research team means that certain areas become susceptible to repeated bouts of logging over a short period of time. The cutting cycles, says Shearman, are far too short in Malaysia to allow for a full regeneration of the carbon stored in the forest, leading to a progressive loss of additional carbon.

The problems of this are not limited to the carbon emissions. Logging threatens the rich biodiversity of the area, and also the livelihood of the indigenous Penan people living in the Sarawak part of the forest.

“Most of the forests in Sarawak have already been logged, much of it five or six times. What happens is they’ll do selective logging, where they go just chop down the biggest trees to start off with, and then they go back and back and back,” Sophie Grig, senior campaigner at Survival International, a charity working for the rights of indigenous people, told RTCC.

“Some of the communities have had their forests logged seven times, until there’s nothing left for them. When the logging happens, it opens up the canopy, and then shrub grows as well. For the Penan, really they can’t live without their forest so the impact on them is particularly devastating.”

The withdrawing of industrial logging could potentially create a big carbon sink; in theory, logged forests could regenerate in 50-100 years. “If left alone to grow back, big old trees pull carbon out of the atmosphere, so there is huge potential for Malaysian Borneo to play a major role in mitigating climate change,” says Shearman.

Travel across the border to Brunei and the contrast is extreme, as 54% of the forests are untouched by logging.

“It really is quite a difference,” Shearman told RTCC. “Almost the entire extent of Malaysian Borneo is covered by a dense pattern of logging roads and logging skid trails, but just across the border in Brunei most of the forests remain intact.”

This may be less due a heightened interest in conservation and more because the economy in Brunei is dependent upon oil and gas. Malaysia and Indonesia, however, are reliant on palm oil; according to the Oil Palm Industry Economic Journal, their combined output contributed almost 87% of world production in 2007 and 91% in the world export market.

“Only small areas of intact forest remain in Malaysian Borneo, because so much has been heavily logged or cleared for timber or oil palm production,” says Jane Bryan, the team leader on the project. “Rainforests that previously contained lots of big old trees, which store carbon and support a diverse ecosystem, are being replaced with oil palm or timber plantations, or hollowed out by logging.”

Brunei currently sits in thirtieth place in the United Nations Human Development Index, while Malaysia comes in at a more modest 64. Shearman believes that this could be related to the logging. In terms of development, he says, “We think that shows that there is a huge opportun

Time KTS and Ali Mahmud printed this in the Borneo Post!