The thin, haunted faces of longhouse folk bear witness to the decades of hardship borne by Sarawak’s indigenous people in a period when lives should have got so much better thanks to the explosion of human know how, medicine, communications and also their WEALTH

Sarawak together with neighbouring Sabah have for decades been the major producers of Malaysia’s oil wealth, timber and so much more in natural resources that have been wasted by their leaders, the Greedy Old Men of GPS. 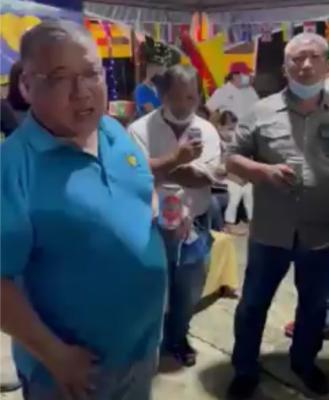 Doing the rounds at the longhouses bringing fags and beer

Yet, the abiding image of this ‘election’, as with so many gone before, will be of the fat, sleek MPs (in this case Bintulu’s Tiong Sing King, left) tuning up with noxious packets of cheap cigarettes and crates of beer to buy favours at election time from people who have so little they are grateful to receive.

Compare these scenes of bribery and blackmail (as the UMNO prime minister openly threatens to withdraw what little federal investment there is in the state from Sarawak’s own oil money if his ‘friends’ from GPS are not voted back) with the position of communities of Brunei who wisely kept out of the Malaysian federation.

Brunei has kept its oil revenues and the Sultans have shown at least some care and mercy for their own well fed people providing for the housing, facilities and the people’s needs.

Taib and his GPS overlords on the other hand are outsiders who care nothing for Sarawakians. His motto has been to keep them poor so they know no greater expectations, treating them as squatters in their own lands and handing control of Sarawak’s oil to his UMNO protectors in Malaysia. 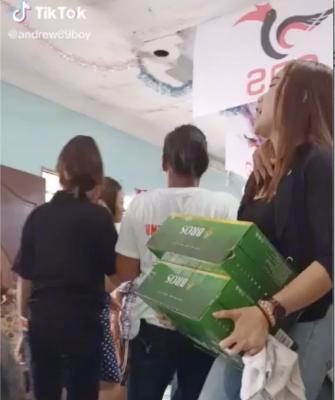 Worth it? GPS are offering cheap ‘election beer’ in return for another five years of exploitation and hunger

That was the pattern set with the surrender of the oil (thanks to trickery by Taib and his uncle who was then CM) in 1974.

Shockingly, the same old men still cling on to power thanks to the vast disparities of wealth they greedily created between themselves and the people – and it is why at this election the same sad ritual of handing out dirty cigarettes, cheap beer and a few ringgit is taking place.

Sarawak’s rich natural resources have been destroyed and the profits have disappeared into foreign tower blocks, tacky branded goods and clothes, silly bikes and cars, gold taps and fat bottoms – all in the possession of the greedy old men who betrayed the people of Sarawak and their useless tribe of hangers on.

With so much wealth available it could all have been so different for the people of Sarawak and yet with this latest sham election called just days before the greedy old men would have been forced to allow the young generation to have their say the cards are in favour of GPS stealing another five years to plunder what little is left of the battered wealth of the state. 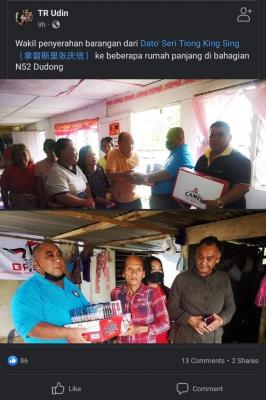 GPS have branded themselves the killer party of Covid, fags and alcohol for hypocrites

The rains have started to fall, Covid stalks every corner and the Christmas season is set to start how many of the poor folk of Sarawak will be able to vote or campaign to save their country?

Sadly, there is an agenda that could transform the hopes and futures of these downtrodden folk, but it comes from those who have neither the stolen money nor the moral depravity to hand out cheap bribes like GPS.

PKR have set out their agenda to transform rural lives by re-setting the state’s spending priorities to help the people and save the landscape.

Not just towards making the same handful of dirty old men richer and richer.

Spend Sarawak’s Money On the People Not GPSTKleptocrats

In PKR’s ‘Welfare & Healthcare’ manifesto the party that is campaigning without handing out the fags, the beers and grubby small denomination notes, is offering instead a real future with a pledge to at last re-direct the wealth of the state – after half a century of solid plunder – away from the off-shore companies and foreign bank accounts of the GPS kleptocrats and their hangers-on to help the rural people.

They have pledged towards Reforestation, Zero Logging and No More Dams. They have also pledged to pay RM500 to each and every impoverished family every month – not just RM50 every five years at election time!

They will restore the land rights of the rural people and put clean water, electricity, roads, and internet as their priority for communities who have lived stone age lives in the 21st century thanks to GPS.

If the longhouse folk can look to their neighbours in Brunei and realise the difference between the records of those who care and those who don’t.

They should vote for such pledges and not for the crook outsiders who stole their land and stole their wealth and forced them into squatter status in their own homelands.