The Lords' List - Who Is Boris Planning To Stuff Into The Upper House?

Multiple leaks have pointed to a slate of predictable nominations to the Upper House as Boris Johnson’s proposed Resignation Honours List comes under review by the House of Lords Appointments Committee [HOLAC] – an institution the prime minister has previously ignored when it has sought to veto his more troubling choices.

In a now established pattern of hawking lordships (reminiscent of a corrupt emerging country often cited on this platform) the key candidates appear to comprise those who have bankrolled not only the Conservative party in recent years but also Johnson himself.

This in the context of a secret proposal leaked by Sarawak Report that has revealed how the sacked prime minister intended to utilise appointments to pack the Upper House with cronies pledged to vote in his favour.

Touted among the ‘Toady Tories’ is the ‘multi-millionaire businessman’ David Ross, who has donated £841,360 to the Conservative party since 2001 and who emerged as the host who paid for Boris and Carrie’s luxurious holiday accommodation on the island of Mustique over Christmas 2019.

Any doubts that Ross was in the running for a peerage were considered dispelled by his exclusive invitation to the celebration of the couple’s wedding last weekend. None of the so-called 250 Club (of big Conservative party donors) were there, according to people present, however Ross was one of a handful of donors who did attend.

The host himself at Daylesford House (after the party was hastily moved off public property at Chequers following Johnson’s ejection from office) is possibly Boris’s most generous personal donor, the billionaire Lord Bamford. The construction magnate has coughed up numerous expenses, including the redecoration of Downing Street as a garish legacy for the next PM to suffer or remove, and thousands of pounds worth of hampers in the guise of ‘Covid food parcels’ for the newly weds to enjoy.

However, unlike Bamford who inherited his business fortune, Ross enjoys a reputation as a self-made entrepreneur (despite his own wealthy parentage as the scion of Ross frozen fish). Thanks to partnerships in new businesses such as Carphone Warehouse and Talk Talk he was listed by Forbes as being worth $1.4 billion on the eve of the financial crash in 2008.

He has played the part ever since, appearing as a society grandee and prominent board member of numerous bodies, including the National Portrait Gallery, before being appointed to the prestigious Chairmanship of the Royal Opera House by Boris Johnson in 2020. Meanwhile, he has continued to lavish the Conservatives and prior to Boris Johnson appeared equally close and generous towards David Cameron and his wife funding grand party occasions for the couple.

However, his detractors, of which he inevitably has a number given his flamboyant profile and reputation for youthful consorts, point out that Ross may not be the ongoing success story portrayed and that, in fact, his finances appear spectacularly shaky.

Indeed, episodes involving debt problems and alleged business improprieties have dogged the would-be Lord for several years, leaving observers to wonder whether he might not bring an unwanted notoriety were matters to come to a sticky head?

As long ago as 2008 Ross was reportedly forced to stand down as the deputy chair of his own Carphone Warehouse after failing to disclose that he had pledged a large proportion of his stake in the company against personal loans.

The company was one of four institutions where he likewise failed to warn fellow directors that he was raising millions on his shares. The scandal forced him to also stand down as Chairman of National Express.

Ross’s ability to raise eyebrows has manifested itself again more recently, following his appointment to the Royal Opera House. Under his Chairmanship, the cash-strapped institution decided last year to sell off a fabled Hockney painting worth £11 million to meet urgent payments. The masterpiece was purchased by an anonymous buyer at auction.

It was only after the buyer started to pressure the auctioneers to stagger the receipts of the money (to the critical disadvantage of the ROH which needed cash fast) did it emerge that the anonymous figure was none other than Ross himself. Fellow directors had apparently been unaware.

Shortly after, it was announced that the philanthropist had decided to take up an unexpected offer by his friend, the new prime minister, to extend his expiring tenure as Chairman of Trustees over at the National Portrait Gallery. In consideration of this, he would therefore surrender his ‘incompatible’ post at the Opera House.

The episode not only signals an on-going pattern of poor disclosure and the bending of norms and rules, but also that liquidity issues apparently continue to stalk the big spending donor and patron of Boris Johnson.

Sarawak Report has been passed research, obtained from open sources, by parties seeking to make that point to the vetting panel at the HOLAC and possibly to the revenue and taxation agencies as well as lenders, whom they claim may also be interested to scrutinise the problem further.

In summary, the report claims “David Ross is highly leveraged, with most of his main investment companies’ assets charged and operations relying on credit facilities rather than operational profit”. It continues that accounts show that the holding company only has net current asset ratio of 0.7 (depreciated from .99 in 2018) which suggests that if the current liabilities were requested by the lenders now, he would not have enough current assets to cover this.

Integral to the situation is the plummeting value of the assets, mainly shares, that originally afforded Ross his billionaire status. For example, his key shares in Talk Talk and in  Currys (from the merger with Carphone Warehouse) have catastrophically decreased in value over the past five years.

In 2017 his equity in Currys was worth £202 million but has dropped 75% in value to £66 million in 2022. In March 2021 he crystallised his Talk Talk holding which had decreased to £125.2 million at the time the company was de-listed which represented a 55% fall per share from its peak five years previously.

The upshot, is that companies that form part of his Mountain Berg Holdings Limited (MBHL) “are running on borrowed money” the researchers claim. For example, Robinson Webster (Holdings) Ltd (RWHL), which owns the shop chain Jigsaw “recently published their accounts, which explicitly spells out that this subsidiary of Ross’s group of companies is kept operational through a credit line guaranteed by Mountain Berg Limited” itself a subsidiary of the MBLH holding company, which is described in those accounts as “a financially secure group“.

However, the report argues, “as at the end of 2020, MBHL was highly leveraged itself, with current liabilities of GBP 221m. Of these, GBP 38m were money borrowed from Credit Suisse as part of a, by now, USD 100m revolving credit facility.”  The report continues “MBL’s liquidity is explicitly justified by the company’s access to the Credit Suisse credit facility”.

The accounts also reveal that beyond the bank loans MBL also relies on a huge amount of borrowed money directly from Ross himself, worth £142m, which it is likely he borrowed elsewhere the report claims. 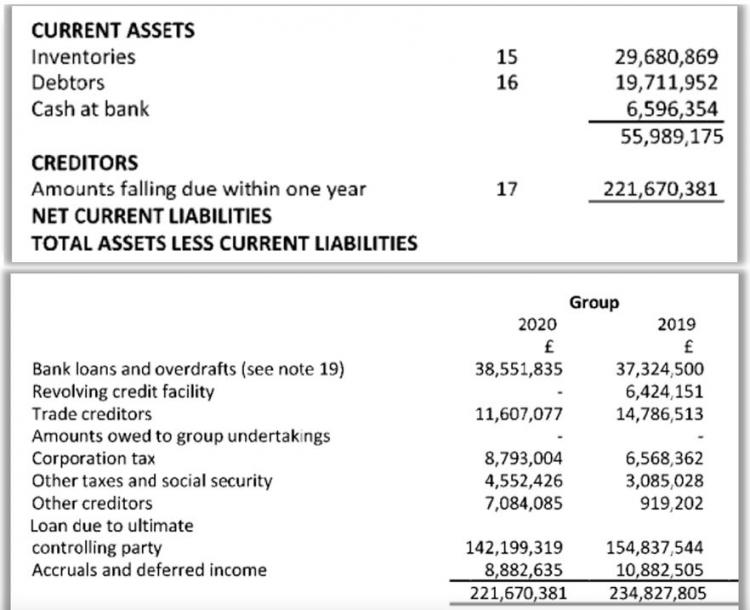 Latest figures for the group show that against current assets of £56 million the group holding company MBHL has debts owed of £221 million, which are only defrayed by a loan from Ross himself of £142 million from sources that are by no means clear.

The structure of these affairs is therefore like a house of cards, ready to collapse should a bank withdraw its credit, concludes the critical report. One tell tale indicator is that the MBLH group delayed repayment of the loans to Credit Suisse from December 2021 to June 2023, “suggesting that they could not repay them”.

Another, is that documents show that since May 2018, Ross has placed charges on all his personal properties except his main home at Nevill Holt, which is also the site of a charitable opera house which he has built in his own grounds with the support of loans and grants. “One property, Holyoaks Farm, with an estimated value of no more than GBP 1m was charged in May 2018, suggesting desperation.”

Moreover, the value of the assets declared by MBL, which were stated as £200 million at the end of 2020, have not only gone down but cannot be fully verified owing to the fact that 2/3 of the assets comprise limited partnerships which have no market visibility in terms of actual worth.

The research claims that “the exposure to tentative valuations is grave”. One indicator is that nearly half of those total investments (£82 million) are in a private equity fund portfolio run by by TDR Capital III, which is said to have invested in a number of businesses badly affected by the pandemic, such as David Lloyd centres.

The negative review also points out that the Ross companies’ auditor is neither wholly independent nor wholly enthusiastic. “The group’s auditor in 2020 was a director of two of Ross’s entities between 2013 and 2021, and was brought in to audit Robinson Webster after BDO resigned as auditors in 2018. In that year, the new auditor only gave a “qualified opinion” of the group accounts, as he could not confirm the asset estimate for Robinson Webster’s inventories.”

There are further discrepancies between MBHL’s accounts and those of subsidiaries: Ballyclare registered a £100k profit in 2020, according to MBHL’s accounts, however the Ballyclare Accounts, up to 31 Dec 2020, give the group a £940k loss.

Crawling over Ross’s Charitable Foundation (The Ross Foundation) the report also notes that the charity’s offices are in the building in 10 St James Place, owned by his Jersey company, Kandahar (Jackson Square) Limited (KJSL) to which the charity recently paid almost £45,000 for “serviced office costs.

In another questionable blurring of interests Ross owns and rents a Chalet in Zurs registered under a UK company 10SJP (Salisbury) Ltd, which is owned by MBL. However, the rental income is instead receivable by his Jersey company KJSL – if it is indeed rented out as required by Austrian law as no income has actually been registered!

Despite such matters, it has to be said that, like many businessmen, David Ross has survived liquidity crises in the past and banks have clearly backed his efforts. He may well restore his situation.

Whether such shaky foundations presently would recommend him as the sort of captain of industry and example of business rectitude, judgement and success that would normally be expected of one chosen to enter the Upper House for life to engage in running Britain is another matter.

The House of Lords Appointments Commission may think not, but will Boris Johnson listen, given his obligations to his friend and previous form in the case other ‘unsuitable’ donors (such as Peter Cruddas and Evgeny Lebedeve) where he over-ruled a HOLAC veto?

Given the growing list of examples such as this, it is hardly surprising that a recent poll has shown that 54% of the British public are against Boris Johnson drawing up a Resignation Honours list at all – just 13% are positively in favour. Indeed, the practice was dispensed with by both Tony Blair and Gordon Brown following the earlier partial reforms of the House of Lords but was later revived by prime ministers Cameron and May.

In the context of the ongoing and blatant abuse in the rewarding big donors with peerages and voting rights in the upper house, the real question surely is whether the system should continue at all?

Sarawak Report has contacted Mr Ross’s public relations advisors who have not immediately responded. However, should they do so the item will be updated.