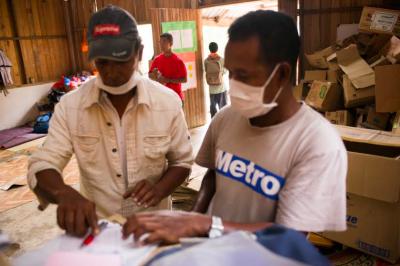 Volunteer Awi Along from Kampung Depak issues a receipt for released items at the food collection center in Kampung Parik. Photo courtesy of JOAS

“We don’t want to be dependent, we just want our livelihoods back,” says flood-affected Orang Asli.

The disastrous damage to houses, sources of clean water and access roads in the recent flooding has been felt most strongly by the Orang Asli of Kelantan. It is estimated that about 30 villages remain as “difficult to reach” areas due to
collapsed bridges, landslides, and alarmingly cracked grounds effectively cutting access roads. For instance, Pos Gob and villages beyond are still inaccessible by road.

“In some places, it looks like there was an earthquake. There is a house in Pos Hau where the crack in the earth has split a man’s house right in the middle. We don’t know if the crack will expand if it rains again,” described Mustafa Along from Kg. Wook, Kelantan.

Food aid and other necessities are being sent in abundance to the collection point in Kampung Parik, Kuala Betis, where Orang Asli from all over have come out to volunteer. Donated items are packed and delivered by a dedicated team, serving not only their village but the entire area.

As much as the aid is needed, appreciated and welcomed, many hope that in the long-term, they would not be dependent on it. Many Orang Asli believe that saving the remaining forest is the only way to ensure their livelihood for their future. 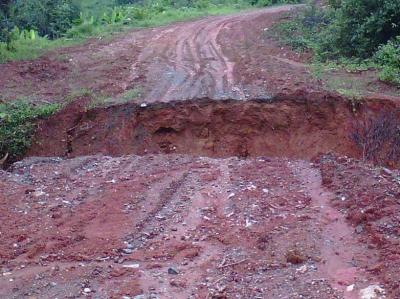 Many villages remain difficult to reach because of broken bridges, landslides and cracks on the earth such as this on the road to Pos Gob. Photo courtesy of JOAS

“The flood destroyed all our crops. It is because of the damage we have done to our earth. We allowed for our forests to be logged, and now the temperature has risen,” lamented John from Kampung Gawin. A group from Kampung Gawin had trekked out for a day and a half to Pos Tohoi to camp by the river earlier this week, in hopes of food aid because they have ran out of alternatives.

While a few sectors have tried to dispell claims that logging caused the flood, Colin Nicholas from the Center for Orang Asli Concerns (COAC) is unconvinced. “It is without a doubt that rampant logging over the years, and most recently the
clearing of large hectares of land area for the state government’s project, the Ladang Rakyat, made the effects of the flood much more drastic than it otherwise would if the forest was still intact,” Nicholas stressed.

The national indigenous network, Jaringan Orang Asal SeMalaysia (JOAS), which has been actively coordinating flood relief efforts for its members and other Orang Asli communities with the COAC, stresses on the need for
immediate action. “We firmly call on the federal and state government to take urgent appropriate measures to restore access roads to the villages and also to stop logging and extensive forest clearance for plantations in and surrounding the Orang Asli areas forthwith,” Thomas Jalong the president of JOAS, reiterated.

For now, logging companies with vested interests are taking the lead in mending broken bridges and access roads to transport timber out, other immediate needs such as healthcare and rebuilding are keeping the local group of Orang Asli volunteers and supporting NGOs busy.