The Gabungan Parti Sarawak (GPS) state government has been told to liaise with Bank Simpanan Nasional (BSN) to set up ATMs in all rural districts so that the cash aid promised by GPS during the recent state election can be dispensed soonest.

Parti Sarawak Bersatu’s (PSB) Miri chief Bruce Chai said that district offices can house ATM kiosks in a practical, secure and workable solution to dispense cash aid to over a million rural Sarawakians as promised by the ruling coalition.

“GPS has promised to give Bantuan Kebajikan Sarawak Sayangku 8.0 (BKSS8.0) to all B40 people and welfare recipients during the 12th state election,” …

Chai said that if GPS is sincere in wanting to fulfil its election pledge, it must “walk the talk”.

He noted that BSN outlets in Miri city are full due to overcrowding by people seeking to withdraw their cash every day.

“Desperate folk eager to secure the aid promised by GPS are coming to Miri city from even as far as the upper reaches of interior Baram just to check their bank balances.

“Their longhouses have no online facilities to check their bank accounts.

“They spend more than a hundred ringgit in transportation charges, and I have seen many queuing up at the Miri BSN premise from before dawn,” he said.

Chai added that he has seen people waiting in queues that extended onto the streets. 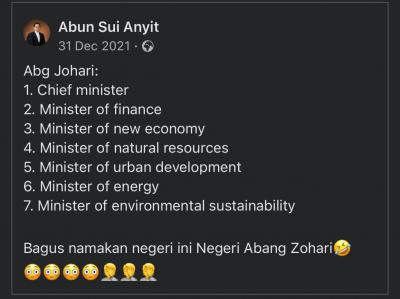 GPS proved themselves highly adept at raiding the state coffers to pay out the standard RM300 in crisp notes to voters according to all accounts (and plenty of visual evidence).

However, managing a country for the benefit of those who need to be assisted and uplifted takes a little more care and concern. As everyone knows, the only reason why GPS want to win elections is so that they can devote another five years to what they describe as “doing business” – namely devising ways to divert public money into private pockets.

Therefore, the post-election promises have not been given a single thought to. Desperately impoverished longhouse folk, who ought to have been awarded a minimum income to support their lives (in return for all the resources taken from their lands) have been spending their tiny resources to enter the towns in the hope of queuing for the promised handouts.

There are simply no channels to deliver cash to where they live.

Abang Jo is simply too concerned with nailing down all the jobs in the government for himself to bother about such trifles. He has rivals to fend off and his position in the dictatorship to secure.

The starving longhouse folk can wait for the next “election” in five years time as far as he’s concerned.