A senior officer, Rostam Affendi Salleh, then wrote to MACC chief commissioner Azam Baki to inform him of their doubts. A police report was also lodged by MACC, naming Shahrum, Khirulnizam and two others as suspects in the alleged wrongdoing.

In the course of their investigation, police found that he had used the seized cash and made several purchases, including:

The court ordered all the assets to be forfeited by the government. 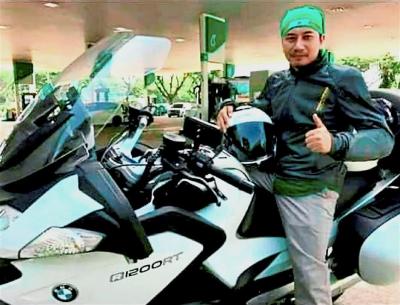 What to expect when those he learns from and looks up to all behave in the same childish and undignified way, whilst so many are living off the proceeds of dishonesty and crime?

Everywhere one looks amongst Malaysia’s leadership you see a combination of loud claims of religiosity followed by the worst possible spoilt brat behaviour, immorality and showing off. Whether it is the son of the leader of the PAS ‘Islamic’ Party happy to pose on expensive super-bikes (apparently it wasn’t his), the son of the would-be returning prime minister (of Wolf of Wall Street fame), the family of Taib Mahmud (or just about any Sarawak politician) or the son of the Sultan of Johor (gold jet) the example shown is of shallow, undignified and childish behaviour – and the showing off of questionable wealth.

There is one significant difference. The lowly copycat has been scooped up in a trice, was convicted and punishment in the form of jail and a lashing, whilst the boastful bullies who run the country continue to strut about flaunting their impunity and brushing aside election rejection like a fly on their sleeves.

Justice now urgently needs to be seen to apply to all in Malaysia – starting with the crooked ex-PM – or else the wrath of an abused Almighty will imminently afflict the nation in the form of economic collapse, famine, infighting and all the other consequences of poor governance and resource destruction.