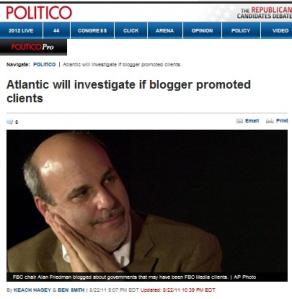 FBC Media story starts to unravel in the US

The story of FBC Media has now hit the United States, where a number of media organisations, magazines and TV stations have had links with the company.

The political blog site Politico has been following developments as our revelations started to hit in Malaysia and the UK today it reported that the magazine Atlantic Monthly, is also launching an investigation into its own links with the company.

Atlantic habitually featured articles on the World Economic Forum, written by Alan Friedman from Davos and there are concerns he could have used this as a platform to promote his clients in the same way that he used TV news programmes on CNBC and BBC World.  For example, this year Friedman chose to write a gushing report on the good governance of Indonesia by its current President  President Susilo Bambang Yudhoyono. 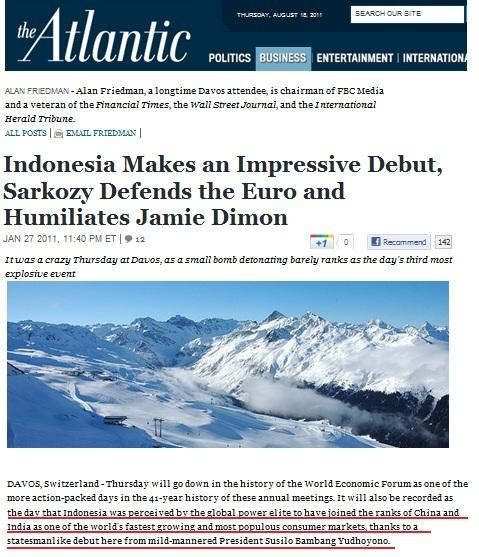 Wow! The top event at Davos this year, according to Friedman

Meanwhile, the Publisher of Atlantic Monthly, Justin Smith, has also announced he is resigning from the Board of FBC Media where he has sat since 2007.  He has acknowledged to Politico that the Chairman of FBC, Alan Friedman had approached him earlier this year to arrange a forum event to be hosted by the magazine, featuring Najib Razak!

This forum was held in March and was indeed hosted by Atlantic Monthly’s James Fallows.  It is understood that Friedman failed to inform the magazine that Najib Razak and the Malaysian Government were PR clients of the company.  Justin Smith told Politico that:

“The truth is that Alan Friedman has been a friend of mine for nearly twenty years. In light of this friendship and my past association with the company, I am very disturbed to learn of the serious allegations being raised about FBC and Alan’s conduct. What I would particularly regret, should these accusations directed at FBC be proven true, is my role in having introduced Alan to The Atlantic’s editors and event planners.
“I have directed a full review of The Atlantic’s dealings with him, and the responsibility at The Atlantic for any problems it might uncover will be mine. It is my job to safeguard at all costs The Atlantic’s reputation for editorial integrity.” [Politico 22.08.2011]

Other media outlets that have been linked to events by FBC Media are Bloomberg’s Business Week Magazine, which runs the European Leaders Forum and the International Herald Tribune, where Alan Friedman formally worked as a correspondent.  Both magazines were listed in FBC’s promotional material as potential ‘media platforms’ for their PR clients, which included the State of Malaysia which has paid over RM 57 million of taxpayers money to FBC over the past two years according to budget records. 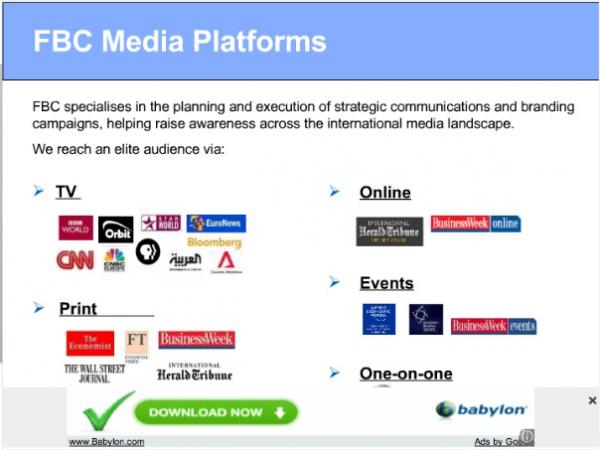 Clients like Najib and Taib were offered all these ‘media platforms’ by FBC Media. But did these outlets know that they were being used in this way?