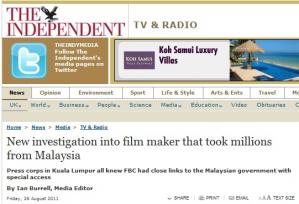 New investigation into film maker that took millions from Malaysia

One of America’s most prestigious magazines, the 154-year-old The Atlantic, has become the latest high-profile news organisation to launch an investigation into its relationship with a media company that was allocated millions of pounds by the Malaysian government.

The Washington-based magazine and website is “reviewing all transactions” it had with FBC, a media company that also produced television programmes for the BBC and the business channel CNBC. The Independent revealed this month that FBC had been hired by Malaysia in a “global strategic communications campaign”.

The FBC programmes broadcast on BBC World News dealt with contentious issues including Malaysia’s treatment of its indigenous peoples, its management of rainforests and its controversial palm-oil industry. The BBC said: “FBC has now admitted to the BBC that it has worked for the Malaysian government. That information was not disclosed to the BBC as we believe it should have been when the BBC contracted programming from FBC. Given this, the BBC has decided to transmit no more programming from FBC while it reviews its relationship with the company.”

The Atlantic has ordered a “full review” into its own relationship with FBC. Justin Smith, president of Atlantic Media Co, publisher of the magazine, has resigned from the board of FBC. FBC’s founder Alan Friedman, a long-term friend of Mr Smith’s, blogged for The Atlantic from this year’s World Economic Forum in Davos. Mr Friedman also encouraged The Atlantic to host an event in March in which the Malaysian Prime Minister, Najib Razak, was interviewed by a correspondent of The Atlantic.

Natalie Raabe, director of communications for The Atlantic, said Mr Smith’s role at FBC was unpaid and “largely nominal”. She said that the magazine was “reviewing all interactions it has had with FBC and its chairman,” including blogs Mr Friedman wrote about Indonesia. “We have found several instances in which Friedman wrote positively about the Indonesian government and its representatives. Our internal process will seek to determine whether Friedman was representing Indonesia at the time he wrote for TheAtlantic.com.”

She said the company was also examining blog comments made by Mr Friedman on Malaysia and had now attached an online reference to inform readers that he was working for the Malaysian government “at or around the time he wrote them”.

FBC also made a half-hourly weekly programme for CNBC, part of the American NBC network. Many of its episodes featured Malaysia. CNBC has withdrawn the programme “indefinitely” and “immediately initiated an examination of FBC and its business practices”. Since publication of The Independent’s investigation, the newspaper has been contacted by numerous correspondents based in Kuala Lumpur, who complained that the broadcasters should have taken action earlier.

One senior international journalist with a decade of experience in Malaysia, said FBC’s relationship with the Malaysian government was “common knowledge among the press corps in KL”. He said: “The real scandal is the failure by BBC and CNBC to police the outsourcing of their programmes. They need to answer some hard questions.”

The BBC said it had “acted swiftly to suspend the broadcasting from FBC” and pointed out that “all independent TV companies who produce programmes for BBC World News have to sign strict agreements”.

A former correspondent for a prominent US magazine said that correspondents became accustomed to seeing FBC granted access to “notoriously press-shy” senior political and business figures who would not speak to other sections of the media. “Knowing FBC and their modus operandi, it was pretty clear how it happened,” he said. The Independent has established that FBC also hired the Washington-based American lobbying company APCO Worldwide for the purpose of “raising awareness of the importance of policies in Malaysia that are pro-business and pro-investment as well as the significance of reform and anti-terrorism efforts in that country”.

FBC denies impropriety in any of its programme-making. Its lawyers said in a letter that “at no time have the television programmes made for the BBC ever been influenced or affected by our client’s commercial activities”. It said that FBC ran production and commercial divisions, which “are and always have been quite separate and distinct”. The BBC, CNBC and the media regulator Ofcom continue to investigate.