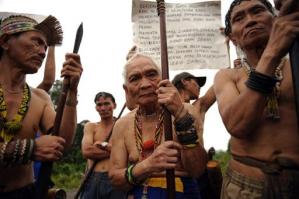 Standing up for their lands against the bulldozers and all Taib’s instruments of state – what chance do they have when BN’s Federal Government turns a blind eye?

As news pours in about the enormous scale of attempted vote-buying currently underway in Sarawak, we can reveal more horrifying details from the investigation by Malaysia’s human rights commission Suhakam.

In particular, the criminal methods used by Taib’s government and cronies to prize away valuable lands from its native people.

These methods include violence, coercion and bribery.

The Suhakam report refers to the use of thugs; imprisonment of innocent NCR landowners and bribes made to headmen.

And it also admits for the first time that the motive for such outrages is clear, because government linked individuals are personally benefitting from these land grabs.

This was the report that BN attempted to hide and suppress before the election, so what hope have the people that BN will address these issues and put matters right after the election as the report itself recommends?

Self-made billionaire MP? Fadillah Yusof is the brother of one of Taib’s key nominees Bustari Yusof

In today’s Sarawak Report we name some of the ‘politicians and influential people’ referred to as being behind the large-scale projects, many of which have removed people from their lands:

“Community witnesses informed the Inquiry that they faced constraints in obtaining support from political leaders in defending their NCR land, especially in the  acquisition of NCR land involving large-scale development projects that involved politicians and influential people” [Suhakam report]

At today’s prices (as quoted by Taib’s femail cousin Fatimah Abdul Yakub) the Keresa Plantation land is worth RM60million. 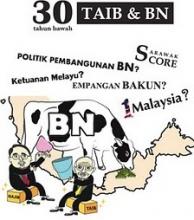 The above names are just some of the better known political figures.

However, we say with confidence that few people standing on the BN ticket have not benefitted in one way or another from the criminal exploitation of NCR lands.

These are usually lands belonging directly to their own constituents, to whom they are now offering a few ringgit per vote in the hope that they can return to office to keep milking their Sarawak cow.

Such political cronies have also received vast timber licences and contracts from the state in return for urging their communities to trust Taib and BN.

On top of these is the army of Taib family members and also Taib business cronies, who have grabbed even more of the lands that used to sustain the poor communities of Sarawak, but which are now turned into dusty oil palm plantations feeding only Indonesian workers. 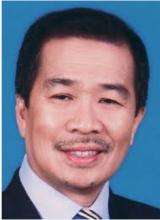 These companies are now being told to pay huge bribes to buy the votes of the people in places like Baram.

However, people accepting the money in return for votes should understand what they are selling for the money – they are selling their land and birthrights and the value of these is far far greater in reality than the money they are being offered for their votes.

The Suhakam report (Chapter 7) lays out in detail how Taib has set up a system for grabbing NCR lands into misleadingly termed ‘Joint Ventures’ that often leave the native landowners with no profit at all.

It notes “with concern” “that there was a lack of transparency in the processes for the formation of the JV” and that there is no direct agreement recorded between the companies and the native land owners.

Instead Taib has outrageously and illegally appointed his own Land Custody and Development Authority (LCDA) to act as the so-called ‘Trustee’ on behalf of the native land owners when negotiating with concession holders.

As everyone knows, placing the rapacious Taib Mahmud and his LCDA in charge of the land owners’ interests is like putting a crocodile in charge of your children!  As Malays say ” Harap kan pagar, pagar makan padi”! 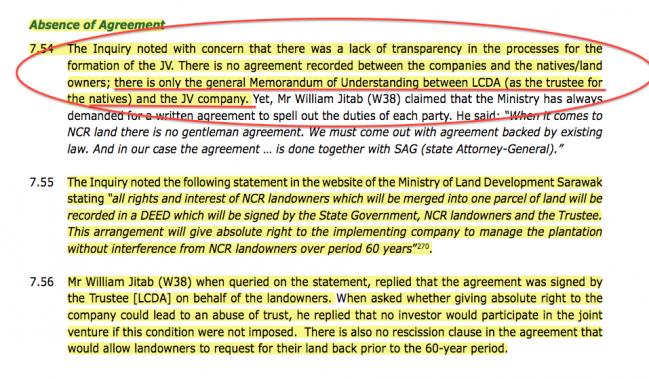 Taib set himself up as the ‘Trustee’ for the natives!

Total power given to the concession companies

Taib has appointed his own LCDA as the ‘Trustee’ for negotiating Joint Ventures on behalf of native landowners!

The inquiry also notes (above) that the deeds negotiated by Taib, supposedly on behalf of these NCR native land owners, “give absolute right to the implementing company to manage the plantation without interference from NCR landowner over a period 60 years”.

What cheek for Taib to sign up to such an agreement in his role as trustee on behalf of the landowners!

Do we think this is what the landowners would have agreed to, if they had been allowed to sign themselves?

And what if the natives of any particular area have decided to disagree with all these plans being made on their behalf by Taib?

Under the Chief Minister’s notorious Sarawak Land Code (which has now been found to be unconstitutional) these poor people can just be over-ruled and their land made subject to compulsory acquisition!

The simple summary of these findings by the Land Rights Inquiry is that Taib has organised matters so that he can chose what land he wants, then hand it over to whichever company he wants, acting as the ‘trustee’ on behalf of native land owners, who have usually never even been told that he has taken their lands.

If they protest and object to the Joint Venture then Taib has given himself the right to take it by compulsory means!

Any NCR owners who object to JVs can be subjected to compulsory purchase!

With such systems in place and such poor communication and un-helpfullness on the part of companies and officials, the Suhakam report says it is not surprising that conflicts and blockades have developed on Sarawak’s territories: 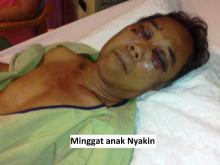 One NCR land owner beaten up by thugs and left unconscious

“Community witnesses complained to the Inquiry that they often find staff of government departments unfriendly and not helpful….community leaders [appointed by Taib] are seen to be easily bought over by private companies, or threatened with sacking or actually sacked for not supporting projects planned in their communities.

“There were also complaints on the use of thugs by companies, and biased police and field force personnel to threaten people. Community organisations, and NGOs who assist communities with their claims or complaints are constantly harassed by special branch police“[Suhakam report – 7.101]

Sarawak Report has recorded many cases of just this form of attack and intimidation, designed to  bully people out of their birthright.

How can Taib pretend he has put the natives first in his ‘development’ proposals?

As one witness to the inquiry put it “anyone who dares to question development is labelled anti-development. All lands are considered as state land, police reports from the communities are not acted upon”.

Only the politicians and their business cronies profit – official!

The other key finding by the Suhakam report is what everyone in Sarawak has long known.  That the profits from these joint ventures do not go to the natives themselves.  It is the politicians who profit, like Naroden Majais and Awang Tengah in the current angry situation in Melikin. 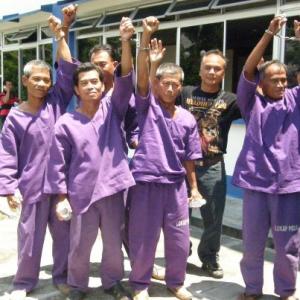 Falsely arrested because of the company’s accusations – Melikin campaigners

In Melikin a company called United Teamtrade has caused devastation of the NCR lands and hurled accusations against NCR land owners accusing them of arson and obstruction, causing a number of unfounded police arrests of local people.

A peaceful blockade has resulted in more strong arm tactics with cars of native leaders burnt out and strings of threats being made to the local people.

Just a few days ago one of the leading native campaigners was slashed by a knife-weilding thug in the open street.  The attacker turned out to be the local boss of United Teamtrade.

So who owns the company itself?  The shareholders are none other than two of Taib’s key ministers Naroden Majais and Awang Tengah, the man who is hoping to succeed Taib soon after the Federal election!

This is what the Suhakam inquiry means by “government linked individuals” and it is a plague that has destroyed Sarawak, thanks to Taib’s promotion of such corruption.

The jobs (and the IC cards) go to Indonesians

And when companies like United Teamtrade take the natives’ lands the inquiry makes plain that the profits are not fairly distributed.  In fact on many occasions after promises of rich dividends they receive nothing at all from Taib’s ‘development’.

SALCRA, which is run by Deputy Chief Minister Alfred Jabu, whose family has become famously rich from the acquisition of huge land areas, is singled out for condemnation when it comes to poor profits. 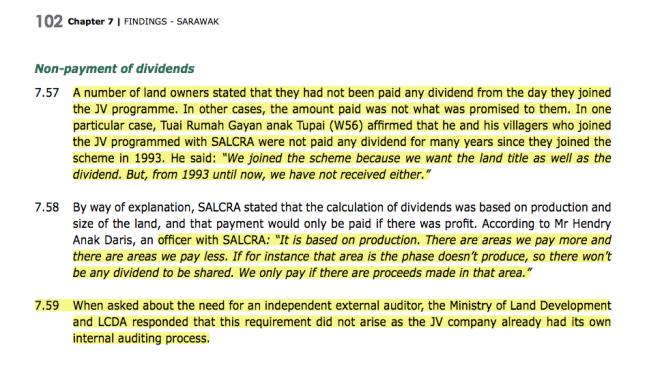 Another favourite trick of the Chief Minister has been to take lands away from native ownership on the basis of making them forest reserves…. and then later re-gazetting them to become plantation lands which he hands to family members like his sister Raziah!

First make it a forest reserve, then re-gazette it to plantation land and hand it to your sisters and brothers!

The Sukaham report details a litany of poor procedures, lack of information, lack of protection and support for NCR land owners, that mean these people have had no protection against Taib the crocodile who has gobbled up their lands.

They should kick him off their padi!